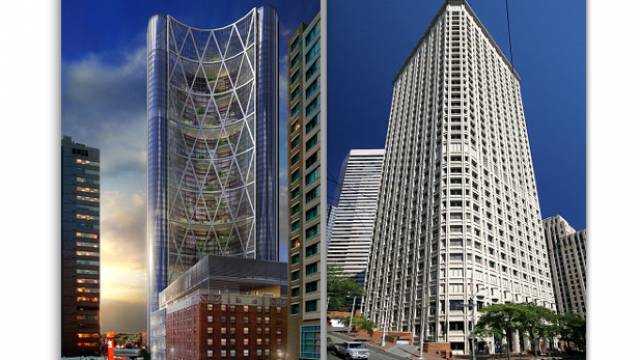 PPG Industries has announced that two projects featuring its glass were among the winners of the 2012 Glass Magazine Awards announced earlier this month. The awards recognize the best products and glass applications in 18 categories in the commercial, retail and fabrication markets as voted by a panel of judges.
The Bow, EnCana Corp. headquarters located in Calgary, Alberta, Canada, was named “most innovative energy efficient glass project.” The brand-new 58-storey curved structure includes a full-height atrium on its south face that uses SOLARBAN® z50 glass by PPG with a high light-to-solar gain (LSG) ratio for both daylighting and energy performance. Along with features such as the building’s curved shape and unique site orientation, the Solarban z50 glass helps EnCana reduce energy use in The Bow by as much as 30% over a typical office building of its size.
The renovation of the Henry M. Jackson Federal Office Building in Seattle was named “most innovative protective glazing project.” Double-pane insulating glass units (IGUs) with Solarban 70XL solar-control, low-emissivity (low-E) glass by PPG on the No. 2 surface replaced ¼-inch monolithic (single-pane) glass windows in the 35-storey structure. IGUs on floors 1-20 include an interior lite of 6-millimeter clear blast-resistant laminated glass to protect the government building, and those on floors 21-35 include an interior lite of 6-millimeter clear glass.
Solarban z50 glass offers a distinctive steel blue-grey look as well as visible light transmittance (VLT) of 51%, a solar heat gain coefficient (SHGC) of 0.31 and a light-to-solar gain (LSG) ratio of 1.70 – the highest of any glass in its category – in a 1-inch IGU. Solarban 70XL glass has VLT of 64% and a SHGC of 0.27, which yields an even higher LSG ratio of 2.37 in a 1-inch IGU.
To determine winners, the Glass Magazine staff compiled nominations and photographs for a panel of 27 judges representing all areas of the glass industry, and then the panel selected a winner in each category.
Founded in 1883, PPG has global headquarters in Pittsburgh and operates in more than 60 countries around the world. Sales in 2011 were USD 14.9 billion. PPG shares are traded on the New York Stock Exchange.