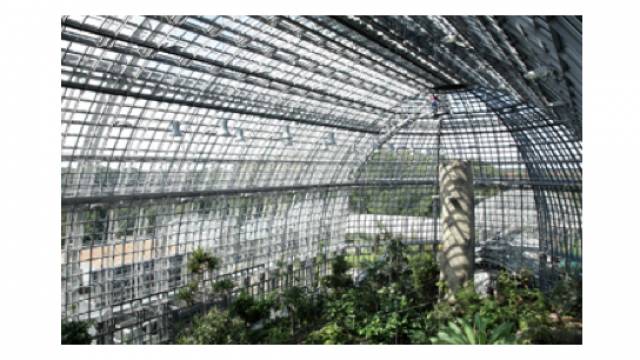 The essential foundation of modern high-tech glass is a premium flat glass: the transparent, colourless EUROWHITE NG guarantees even better light and energy transmittance in future – for unalloyed efficiency and a proven neutral optical appearance.

With its heavily reduced iron oxide content, EUROWHITE NG has no “green tint” and increases the transmittance of light and solar energy, letting through 91% of incident light at glass thicknesses of up to 12mm and 90% of the solar heat at thicknesses of up to 8mm – thus achieving up to 2% more energy transmittance than comparable extra-white glass. Whether as laminated safety glass or with functional coatings, EUROWHITE NG can be used virtually without restriction on façades and in interior design, as well as in thin-film photovoltaics, increases the technical efficiency of buildings and solar applications with its light and energy transmittance, and enhances the aesthetic subtlety of façades and interior designs with its colour neutrality. EUROWHITE is NG supplied in standard dimensions of 3,210 x 6,000mm and in custom sizes of up to 12 metres’ length. It is now available in various thicknesses; the full range of thickness can be ordered from the spring of 2013.
The g-value denotes the total energy transmittance from the surface of the pane into the interior of the room as a percentage. It comprises the energy transmittance and energy absorption of the glass – because a small amount of the heat absorbed by the glass is also released into the interior space. The higher the g-value, the larger the volume of solar radiation, which enters the interior via the glazing as radiant heat. In this respect, EUROWHITE NG features a significantly higher g-value of 91% than similar other glasses in thicknesses of up to 6mm, while a thickness of 12mm still allows a solar energy transmittance of 89%. The captured solar heat can make a solid contribution to a building’s energy management, thereby considerably improving its energy efficiency.
The transparent extra-white glass also features a high light transmittance of 91% at up to 12mm pane thickness. Intelligent lighting design, which uses captured daylight in this way and combines it with artificial light sources does not just improve the energy efficiency of a building but also the well-being of its users. The high degree of EUROWHITE NG’s transparency ensures brightness and both clear and light aesthetics.
EUROWHITE’s neutral optical appearance is also confirmed by the colour reproduction index (Ra), which measures the extent to which glass distorts natural colours in the human eye. EUROWHITE’s high degree of colour fastness enables aesthetically attractive façade designs and both storefront window and showcase glazing with maximum colour neutrality. Even when processed as laminated safety glass with a high element thickness, the optimum colour neutrality and high transparency remain unaffected. In addition, when using different glass thicknesses, the overall impression on the building remains homogenous. At the same time, the extreme optical brilliance of EUROWHITE contributes to a radiant façade. Greenhouse construction is an area in which the transmittance properties of EUROWHITE are particularly in demand: here, it ensures a perfect climate for growth by allowing virtually unhindered transmittance of solar heat, light and UV radiation and trapping the heat inside. In 2009, the refurbishment of the historic Great Pavilion at Berlin’s Botanical Garden was completed with a specially developed laminated safety glass based on EUROWHITE. This not only secured the existence of the listed building but also halved its energy consumption thanks to the transparent insulated glazing combined with a new air-conditioning system.
EUROGLAS was established by a cooperation of five independent medium-sized glass processing companies and today is one of the largest glass manufacturing companies in Europe. The parent company, Glas Trösch, is based in Switzerland. With some 920 employees, the four EUROGLAS facilities in Haldensleben (D), Osterweddingen (D), Hombourg (F) and Ujazd (PL) produce float glass, extra-white glass for solar applications, laminated safety glass and coated glass for applications in the area of thermal and sun protection, as well as semi-finished products for the thin film photovoltaics.