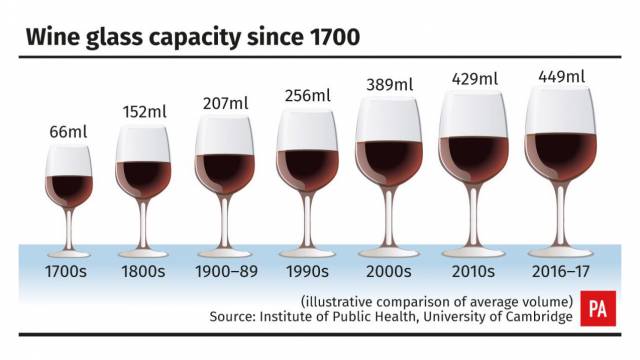 Experts in antique drinkware have helped to confirm that wine glass capacity increased from 66ml in the 1700s to an average of 449ml now.

Research has looked at how the capacity of wineglasses has risen over centuries, showing that the capacity of wine glasses has increased sevenfold in the last 300 years and most steeply in the last two decades, a study has found.
Researchers believe this growth in glass size may have encouraged the nation’s increasing wine consumption, which rose almost fourfold between 1960 and 1980, and almost doubled again between 1980 and 2004.
The new study, published in the BMJ, examines this possible link, with researchers acknowledging that cheaper prices, wider availability and greater marketing of wine were also likely to play a role.
The data about glass sizes over time was obtained by researchers who conducted online searches and spoke to experts in antique glassware, including museum curators, to obtain measurements of 411 glasses from 1700 to modern day.
They found that wine glass capacity increased from 66ml in the 1700s to 417ml in the 2000s, with the mean wine glass size in 2016/17 being 449ml.
In a separate experiment carried out in Cambridge last year, researchers found that selling wine in larger glasses – even when the amount in the glass remained the same – may encourage people to drink more. They found using larger glasses led to an almost 10% increase in sales.
Professor Theresa Marteau, director of the Behaviour and Health Research Unit at Cambridge University, said: “Wine will no doubt be a feature of some merry Christmas nights, but when it comes to how much we drink, wine glass size probably does matter.”
Dr Zorana Zupan, first author of the glass size study, said: “Our findings suggest that the capacity of wine glasses in England increased significantly over the past 300 years.
“For the most part, this was gradual, but since the 1990s, the size has increased rapidly.
“Whether this led to the rise in wine consumption in England, we can’t say for certain, but a wine glass 300 years ago would only have held about a half of today’s small measure.
“On top of this, we also have some evidence that suggests wine glass size itself influences consumption.”
Increases in the size of wine glasses over time likely reflect changes in a number of factors including price, glass technology, societal wealth and wine appreciation.
For instance, the “Glass Excise” tax, levied in the mid-18th century, led to the manufacture of smaller glass products, and sizes increased after it was abolished in 1845.
Researchers argue that new policy options could become viable if it was proven that larger wine glasses had an impact upon consumption.
These policy options could include restricting the size of wine glasses in licensed premises, potentially shifting the societal norm and encouraging people to use smaller glasses at home.
But the researchers acknowledge the seasonal sensitivity to these suggestions in the final line of their report: “We predict – with moderate confidence – that, while there will be some resistance to these suggestions, their palatability will be greater in the month of January than that of December.”