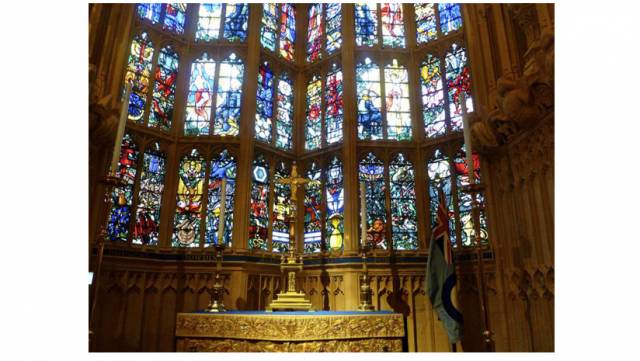 John Mauro, Penn State glass researcher, will be reporting on the investigation of the 13th-century glass of London’s Westminster Abbey, in the upcoming edition of the Journal of the American Ceramic Society.

Gazing through the stained-glass windows of London’s Westminster Abbey can evoke memories as diverse and vivid as the windows themselves, but to John Mauro, Penn State glass researcher, the windows sparked a quest to better understand the science behind the iconic portals to history.
In the January 2018 issue of the Journal of the American Ceramic Society, Mauro reports on the investigation of the 13th-century glass and dispelled the myth that cathedral glass is thicker at the bottom because of glass viscosity, or its slow transition to a liquid. While that has been established before, but Mauro, along with three other researchers, determined that the science was off by 16 orders of magnitude.
What does that mean? It means those windows are transitioning to a liquid much faster than previously thought. However, the transition is still far too slow for a noticeable difference. For example, it would still take billions of years to cause nano-sized alterations to the shape of the glass.
“It was a lot of fun to directly address an urban legend that has captured the imagination of the general public for so many decades,” said Mauro, professor of materials science and engineering. “Glassy materials have captured the attention of humanity for millennia, and I hope that this work will help draw more attention to the cutting edge physics and chemistry that are still hiding in these ancient and beautiful materials.”
Mauro’s team found several opportunities for improvement in the science of cathedral glass flow.
First, previous publications considered modern soda lime silicate and germania glass compositions rather than directly considering a real medieval cathedral glass composition. Previous work also did not include explicit fluid-flow calculations and was based on measurements conducted decades ago in the former Soviet Union.
This work resulted in a new theory, the Mauro-Allan-Potuzak (MAP) equation, which the researchers said more accurately captures the detailed viscous flow of glass, including the composition dependence of glass viscosity.
Mauro, who has advocated for changing the definition of glass, said this research helped him arrive at that conclusion. Because of its unique transitional properties, glass has eluded definition, even among experts.
“This research emphasizes the hybrid liquid-solid nature of glass,” Mauro said. “Glass has a liquid-like atomic structure and also exhibits viscous flow like a liquid. But mechanically it responds as a solid material, since the configurational degrees of freedom are largely frozen at typical experimental time scales.”
Mauro first questioned the science behind medieval glass while studying Gorilla Glass at Corning, where he worked for 18 years perfecting the product found in billions of electronic devices. In the first iteration of Gorilla Glass, researchers found that it shrank measurably when well below its transition temperature.
“This led us to measure the low-temperature viscosity of Gorilla Glass,” Mauro said. “We found that the room-temperature viscosity of Gorilla Glass is many orders of magnitude less than what had been previously reported for medieval cathedral glass. This led me to question whether the previous estimates for the room-temperature viscosity of cathedral glass were artificially high.”
That question led Mauro to this work that ultimately resulted in the past helping to shape the future of glass research.