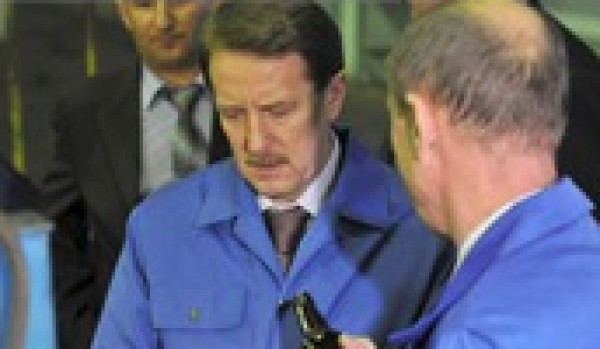 During his recent visit to Voronezh glass plant, the Governor of the Voronezh region Alexei Gordeev spoke to company management about production and the expansion of the scope of the glass produced.

The Governor of the Voronezh region Alexei Gordeev visited Voronezh glass plant – a branch of LLC “RASCO” – on 12 January 2012 to examine production and meet with the management.
Daily production capacity of the plant was about 1 million 300 thousand bottles in 2011 compared to 1 million in 2010, with the number of products increasing from 27 to 65, as a result of large-scale modernization of the production line at the factory.
The company was established in 2000. Phase 1 of the project on its technical upgrading was implemented in 2008, when obsolete equipment was replaced by modern high-performance and more cost-effective equipment and controls. Stage 2 was completed in 2011: two new machines were added to the existing glass furnace, allowing more efficient use of existing equipment and produce higher quality products. In this period, the company also started the production of glass containers for non-alcoholic products – in particular, those for juices and mineral water.
Using new technology, the company also manufactures new bottles, which are lighter than old-style products, and which enable the plant to save raw materials, energy and financial resources by 25-30%.
Two main issues were discussed during the meeting: the first regarded the manufacture of returnable glass containers. Today, in fact, the amount of cullet in the total mass involved in product material is 40%, coming from supply firms from other regions. Gordeev suggested the need to increase cooperation with the “RASCO” Voronezh enterprises engaged in the collection of glass, thus increasing the percentage of cullet used, and production in general.
The second issue of the meeting was to expand the scope of the glass produced by using it for bottling non-alcoholic products.
“We see a decline in beer consumption in our society, which is positive. It is now necessary to find a further use for this environmentally friendly form of packaging, already used extensively in the production of mineral water, juices and dairy products,” said Gordeev.
The governor placed particular emphasis on dairy products as the most healthful and in need of popularization. He proposed a meeting between the plant and the regional department of industry, transport and innovation, with local processors of milk.