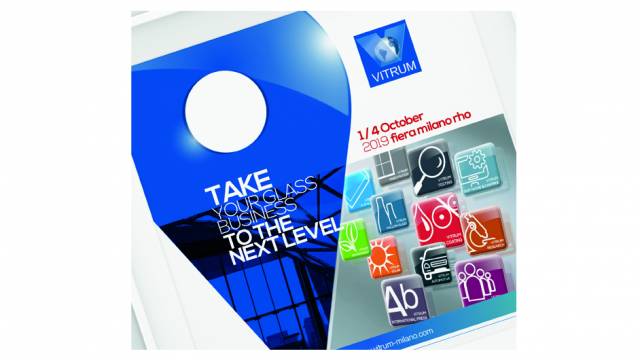 Vitrum 2019 will have an innovative look

Vitrum 2019 – the 21st edition – will have 12 descriptive themed pathways to improve access to the show for visitors, but also to provide exhibitors with even higher visibility.

‘Vitrum specialized’ is the name given to the 12 descriptive themed pathways that will provide greater visibility to Exhibitors as well as improved access to the show for all trade professionals.
“Throughout the 2017 edition,” explains president Dino Zandonella Necca, “we paid attention to the needs expressed by the participants – exhibitors, trade professionals, visitors, associations and institutions – and we carefully analyzed the feedback that came in after the event. Driven by the findings in this review, we agreed it was time to focus on some specific themes: themes that we can transform into exciting opportunities for greater visibility for all exhibitors.”
Vitrum 2019 will have an innovative look, one that turns the exhibitors’ need for visibility into descriptive themed pathways, each with its own immediately recognizable logo:
* Vitrum Flat Glass
* Vitrum Hollow Glass
* Vitrum Fenestration
* Vitrum Solar
* Vitrum Automotive
* Vitrum Printing & Coating
* Vitrum Environment
* Vitrum Testing
* Vitrum Research
* Vitrum Software & Control
* Vitrum Associations
* Vitrum International Press
These are the 12 Vitrum Specialized logos. In other words, representations of the macro-categories in which the exhibitors operate, and which they can use to clearly identify their own specialization or specializations. Each exhibitor can choose to use one or more logos.
The Vitrum Specialized logos will be affixed in clear view at the exhibitors’ stands during the four days of the show, and will also be printed in the Vitrum 2019 catalogue alongside the company name, and on the show maps (given to visitors) that provide stand locations.
The maps will be the core tool in this innovative means of communication because they will show the designated themed pathways to help visitors plan their itineraries inside the show, based on their specific interests.
Additional specially-designed campaigns will promote widespread circulation of the initiative through press releases and dedicated newsletters in which the content of the participating companies will be highlighted, in order to trigger another effective referral mechanism.