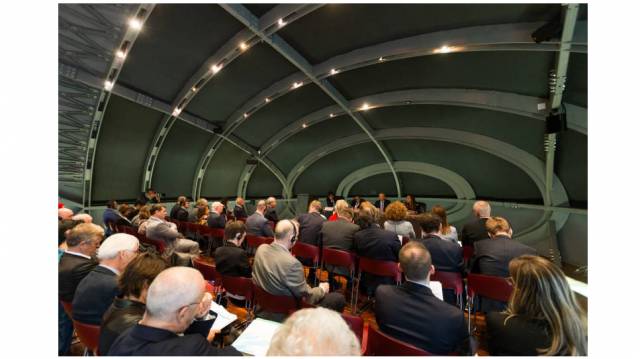 At this year’s Vitrum, visitors arrived from 86 countries, including all of Europe; North, Central and South America; the Middle and Far East; Asia and Oceania

245 exhibitors from 21 countries around the globe, more than 12,000 entrances overall during the four days of the show, with 10,653 registered participants and a ‘cream of the crop’ display of technologies and systems over a net occupied surface area of 14,564 square meters. These are the numbers that encapsulate the 2017 edition of Vitrum – the international trade show dedicated to machinery, equipment and special products for flat and hollow glass processing – held October 3-6 at Fiera Milano Rho.
This year, the international appeal of the Milanese show was corroborated, above all, by the high percentage of foreign exhibitors (nearly 48%; the other 52% was from Italy). They came from Australia, Austria, Belgium, Brazil, China, Egypt, Estonia, Finland, France, Germany, Israel, the Netherlands, the United Kingdom, the Czech Republic, the Republic of San Marino, Russia, Slovakia, Spain, the United States, Switzerland and Turkey.
Visitors arrived from 86 countries, including all of Europe; North, Central and South America; the Middle and Far East; Asia and Oceania.
“Thanks to the proactive support of ITA (Italian Trade Agency), in this ‘year zero’, Vitrum expanded its international reach, confirming that it is ‘everyone’s house of glass’ – remarks Vitrum president, Dino Zandonella Necca – From the earliest organizational phases of the event, our quest to venture further afield, beyond our borders, was empowered through massive communication and promotion programs at leading industry events and many institutional meetings we attended, over the last two years, across Europe and around the world. I am also keen to point out the (entirely spontaneous) contribution made to the success of Vitrum 2017 by international glass industry stakeholders who brought several delegations of industry professionals from their respective countries, along with new ideas and proposals for the future to the show in Milan. Further proof of the efficacy of the partnerships we cultivated with the International Glass Associations”.
Another compelling fact is the number of manufacturers on hand at Vitrum 2017 — 186 of them participated in this 20th edition, equal to 76% of all exhibitors. The exhibits themselves were high-performers, featuring high-value displays of machinery, accessories and special products for the processing of Flat Glass and Hollow Glass: “The value was considerable – states Laura Biason, director of Vitrum – because it epitomizes the extraordinary effort invested by the exhibiting companies. Actual production plants were installed for the 4 days of the fair — perfectly functioning, complex solutions that are the utmost expression of the premises behind Industry 4.0, a paradigm our industry had already adopted as its own. The positive feedback from experts and professionals concerning the informative seminars and training events featured at this edition of Vitrum further validated the urgency to continue in this direction. The seminars are much-needed and well-attended opportunities for growth and sharing of information and we intend to expand their scope and contents in the future”.
Technology and Innovation were highlighted in the “Unique Interpretations – Glass Experiences” Area that offered the Vitrum audience a moment of far-reaching cultural reflection. The sophisticated and elegant niche exhibit combined the infinite possibilities of technological innovation with art, craftsmanship and design applied to glass. The valuable works on display won the admiration of visitors and exhibitors alike.
Vitrum 2017, more social than ever. Response to the call of hashtag #Vitrum2017 was spectacular. Many, many exhibitors and industry professionals used it, not only as a communication tool from and to the Show, but also – and above all – as a channel for sharing the “Vitrum experience”. “#Vitrum2017 was with us – explains Laura Biason – throughout the fair, intensifying (in the way only social media can do) the reverberations of the event well beyond the pavilions of the Milanese fair district. #Vitrum2017 became the key word that coalesced interest in the event during its key moments. And continued to influence people regarding all the possible itineraries that spread out from the fairgrounds toward Milan and, from Milan, to the most beautiful landmarks our country has to offer”.
“Qualified trade professionals, discerning business prospects: these were the must-haves of the 2017 edition – concludes president Dino Zandonella Necca – And the rave reviews from visitors convinced us of a growing affection for Vitrum, and for the valuable solutions, innovations and expectations for the future it offers”.