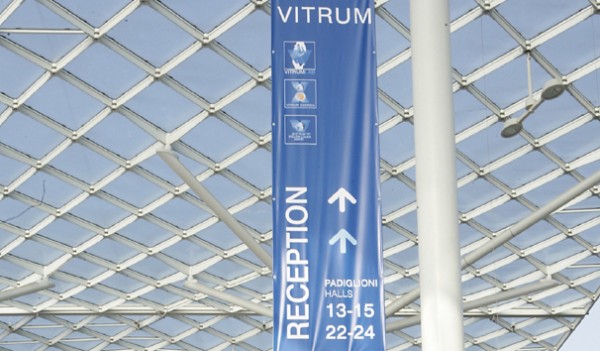 Vitrum – the international trade fair for machinery, equipment and systems for the processing of flat and hollow glass, glass and finished products for the industry, 26-29 October at the Rho Fiera Milano fairgrounds – closed by registering keen interest and lively participation, with final statistics confirming this with attendance exceeding initial expectations: 20,255 visitors (similar to Vitrum 2009), 10,478 of whom from Italy and 9,777 from overseas (up by 3.30% vs. 2009).
Taking up 26,727 sq.m. of net surface area, with an 1.34% increase compared to the previous show in 2009, this year’s Vitrum had 482 exhibitors from 26 different countries, a 5.96% increase of overseas exhibitors compared to the previous show. The main areas of origin of exhibitors were Italy, Germany and China, followed by the UK and the US, and the 251 Italian exhibitors had approximately 68.63% of the exhibition area.
As confirmed by Renata Gaffo, Director of Vitrum: “ We are satisfied with the number of Italian and overseas visitors who appreciated this year’s Vitrum as well as with the number of participating exhibitors. The market situation is still uncertain and demand fluctuates between pick-up and fall-off moments, but once again Vitrum results are tangible proof of the industry buoyancy“.
The first Vitrum Gourmet Festival, a festival dedicated to Italian haute cuisine, during which, four chefs with, all together, seven Michelin stars, took centre stage, was very positively received. Each day during the fair, a different chef showed off his skills by preparing a special, select menu from his own repertoire.