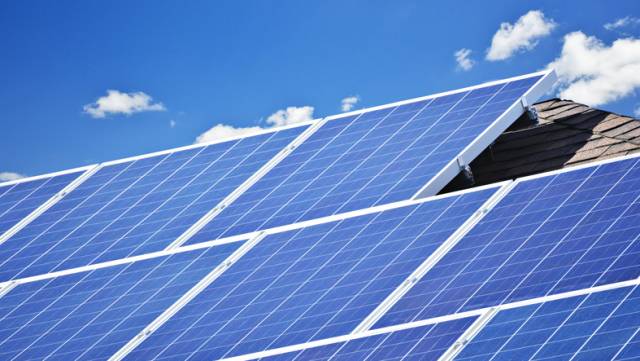 Gerresheimer dedicated a new 11 million USD rooftop solar system, allowing the company to continue pharmaceutical glass production with environmentally-friendly energy. The solar project involved nine months of work. KDC Solar Inc. of Bedminster owns the photovoltaic — or PV system — and built the project. “It’s a win-win,” said Georg E. Annen, chief financial officer for Gerresheimer, who spoke at the ribbon cutting. “We are looking toward the next 15 years to utilize these solar panels.” KDC will operate the PV system and supply Gerresheimer with 100 percent of the generated power for the next 15 years. “Sustainability is one of our company’s priority objectives,” said Dave Watson, vice president of finance and controlling at Gerresheimer, who oversaw the project. “Photovoltaics provide us with the perfect means of combining eco-friendliness with economic efficiency.”

Gerresheimer expects solar power will reduce the facility’s annual carbon footprint by 1,350 tons. That’s equal to the reduction that could be achieved if all 500 employees at Gerresheimer’s plants in Vineland and Forest Grove stopped using their cars, according to a company statement. The solar system spans 52,624 square yards across the roof of the firm’s tubular glass plant on Crystal Avenue. It covers an area 10 times the size of a football field. The 2.8-megawatt system consists of thousands of mono-crystalline solar panels. It is one of the 10 biggest roof-mounted PV systems operated in the nation, according to a statement from Gerresheimer. Mayor Robert Romano and city Municipal Utilities Director Joseph Isabella attended the dedication ceremony, which included throwing a simulated solar power switch. Isabella talked about how the city’s electric utility has undertaken its own major solar initiatives in recent years to help reduce its energy costs and be more environmentally friendly.

“The city has worked hard to drive rates down each year for the last four years,” Isabella said. “You have joined a very special team in solar. Thank you to Gerresheimer, and we are happy you are investing in Vineland.” Romano congratulated Gerresheimer for investing in solar. “We’ve lowered rates in the city four times, which helped Gerresheimer, too,” he said. “We’re grateful for the number of jobs Gerresheimer supplies to our city and the area. Going green is the way to go, and that is the way Joe (Isabella) and I and the city are going, too.” Thomas P. Lynch, executive vice president of KDC Solar, said the project is one of two in Cumberland County. The company also provided solar panels for Atlantic Coast Freezers in Vineland, a worldwide distributor of frozen foods. KDC also is involved in ongoing projects in North Jersey. “Building this facility also generated 20,000 (construction) man-hours, which put employment in the picture,” Lynch said. “We were able to get folks out to work, and we hope to do more in the future.”
Frank J. Byers, general manager for Byers Electrical Construction in Bear, Del., and Clayton said his company provided the electrical installation for the solar panels.

The Gerresheimer plant generates as much as 3.65 million kilowatt-hours of electricity annually for the production of tubular glass. The generation covers more than 33% of the plant’s electricity requirements in peak load periods. Gerresheimer said the entire group is taking part in one of the world’s biggest environmental initiatives, the Carbon Disclosure Project. Gerresheimer said the nonprofit organization was founded in London. It checks and monitors greenhouse emissions of companies on a worldwide basis and also identifies the strategies that companies implement in response to climate change.