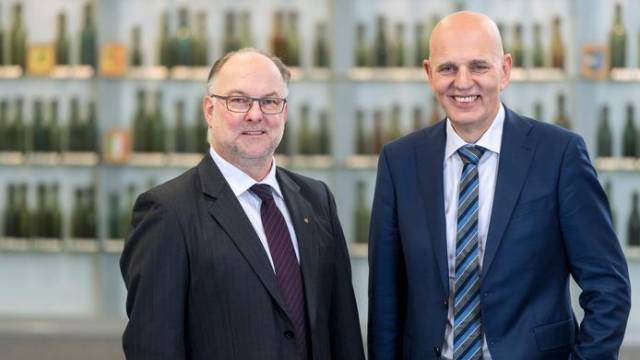 The Board of Directors of Vetropack Holding Ltd has appointed Johann Reiter, General Manager of the Business Division Switzerland/Austria, as CEO of Vetropack Group with effect from 1 January 2018.

Claude R. Cornaz, who will continue to lead Vetropack Group as CEO until the end of 2017, is stepping back from operational business and will be proposed as the new Chairman of the Board of Directors at the Annual General Assembly in 2018. Hans Rüegg, Chairman of the Board of Directors of Vetropack Group, will stand for election for one more year at the Annual General Assembly on 10 May 2017, but will leave the Board at the Annual General Assembly in 2018, having reached the age of retirement.
The CEO designate of Vetropack Group, Johann Reiter, has been successfully in charge of the Business Division Switzerland/Austria since 1 November 2010. This division consists of the Swiss company Vetropack Ltd and Vetropack Austria GmbH. As a member of the Group Management team, he is not only very familiar with the situation in both countries, but also knows all about the international challenges facing the glass industry, especially in those countries in which Vetropack Group has a presence. The search for a successor for Johann Reiter in his present role will start immediately.
“In Johann Reiter, we have chosen a very experienced manager and someone with extensive knowledge of our industry to succeed Claude R. Cornaz,” says Chairman of the Vetropack Board of Directors Hans Rüegg. “We deliberately opted for an internal appointment, because Johann Reiter, as head of our biggest business division, has excellent contacts in the industry and within our group. He is familiar not only with our managers and staff but also with the needs of the markets and our customers.”
Claude R. Cornaz is to step back from operational business at the end of 2017 and will be proposed as the Chairman of the Board of Directors at the Vetropack Group Annual General Assembly in 2018. In that role he will concentrate mainly on the company’s long-term strategic development.
“I am very pleased to be able to hand over to Johann Reiter a financially sound Vetropack Group that is in a strategically good place and is led by a strong team,” declares Claude R. Cornaz, who has been CEO for 18 years and has steadily built up Vetropack Group over that time.