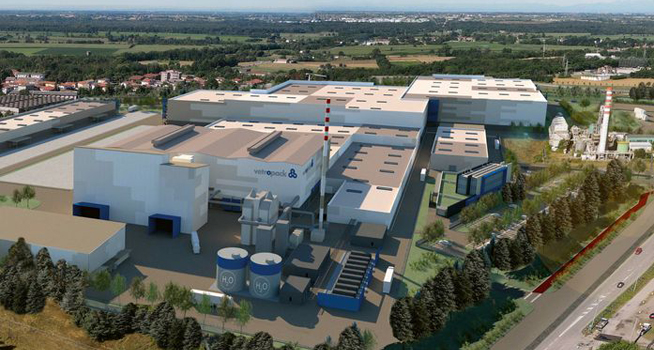 Vetropack Group, one of Europe’s leading glass manufacturers, is investing over CHF 400 million in a new plant for the traditionally important Italian market. Production is expected to start in Boffalora sopra Ticino near Milan in the second quarter of 2023. The new high-tech site offers more flexibility in production with higher capacities and a focus on sustainable processes.

The Italian subsidiary Vetropack Italia S.r.l. has been part of the Vetropack Group since 2015. Its history in glass manufacturing, however, dates back to 1960. As the previous site in Trezzano sul Naviglio will not meet Vetropack’s ambitious goals in terms of quality and sustainability in the long term, the Group decided to build a new production facility in Boffalora sopra Ticino, about 25 kilometres away.

“The Italian market is of great importance to us and, with its many global brands, plays a central role in our strategy,” explained Johann Reiter, CEO of Vetropack Holding Ltd.

The new, state-of-the-art production plant is being built on the site of the former Reno di Medici paper mill and covers an area of 347,000 square metres, 170,000 of which will be used for the actual production facilities. Like in the old plant, two furnaces will be put into operation at first. Compared to the previous site, however, the manufacturer expects an increase in production capacity of around 70 percent.

The infrastructure is geared towards capacity expansion, as Vetropack anticipates positive market development in Italy and beyond in the medium term. All 301 employees of the previous site have been offered a transfer. Despite a significant increase in production volume per employee, the workforce will even continue to grow. New and existing employees have already been trained for the new production equipment since 2020.

Individual small batches and sustainability
In Boffalora, Vetropack is investing in high-performance and smart technologies which facilitate more flexible, customized, and resource-efficient operations.

“Thanks to modern equipment and processes, we can produce more flexibly and better meet the increasing demand for high-quality packaging, even in smaller volumes – so-called semi-specials,” said Christoph Burgermeister, project manager at Vetropack. At the same time, the site is geared towards significantly more sustainable production.

A series of measures reduces potential environmental pollution considerably. The demolition material from a former paper mill on the same site is being re-purposed in the construction of the new plant. Water used for production and exhaust heat from the blast furnaces is reused as much as possible thanks to recirculation systems, and emissions are greatly reduced with the help of the latest filter systems.

Project manager Burgermeister looks ahead optimistically and said, “We are looking forward to the start of a new era for our customers and are confident that Boffalora will have a positive impact on the entire Vetropack Group.”