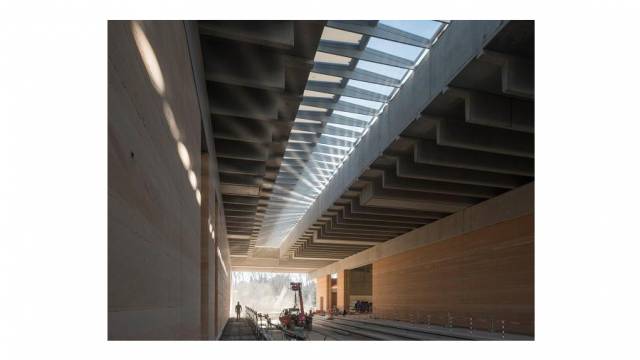 The new museum of antiquities in Narbonne, France, celebrates completion of the building envelope with Velux Modular Skylights installed on the roof.

The president of the Région Occitanie, Carole Delga, Mayor of Narbonne, Didier Mouly and the President of the Metropole of Narbonne, Jacque Bascou visited the new museum of antiquities in Narbonne to mark the completion of the building envelope.
Once open in 2019, the museum will be one of the most significant cultural attractions in the region, home to more than 1,000 Roman funerary stones, along with other significant artefacts.
This was the first preview of the initial construction phase of the new museum of antiquities in Narbonne, designed by Foster + Partners in collaboration with museum specialist Studio Adrian Gardère. At this occasion, the new name of the museum was also announced: NARBO VIA.
The dignitaries got a glimpse, not only of the magnitude of the building itself, but also its comprehensive environmental strategy featuring a precast concrete roof canopy supported by load-bearing SIREWALLs (Structural Insulated Rammed Earth).
“With the completion of the building’s envelope, we can see the richness of the building for the first time, which is immensely exciting for everyone involved. The museum is not only an important cultural institution for the region, but it also plays a vital role in the regeneration of this part of the city. We are grateful for the support and vision of the Région Occitanie and the City of Narbonne,” said Spencer de Grey, Head of Design, Foster + Partners.
The delegation also witnessed the installation – currently underway – of a large-scale, highly elegant glass roof construction using Velux Modular Skylights. While many of the exhibits need to be protected from sunlight, these skylights will flood the museum’s signature collection of Roman relief sculptures – displayed in a dynamic storage wall – as well as the communal spaces, with carefully modulated natural light.
Brent Møller, architect and designer at the Velux Group, who worked closely with Foster + Partners in developing Velux Modular Skylights, said: “NARBO VIA is an extremely interesting project due to the way it conveys an elegant dialogue between past and future and between interior and exterior surroundings. We are proud to be part of such a state-of-the art cultural site, which, I’m convinced, will set new standards for museum design in the future.”
The original co-development of Velux Modular Skylights with Foster + Partners provided valuable insight into the design and functional possibilities of the system, and this has ensured an optimum usage of the system in this project.
The glass roof construction comprises a total of 150 skylight modules, which run across the building providing natural daylight and enhancing the building’s thermal performance.