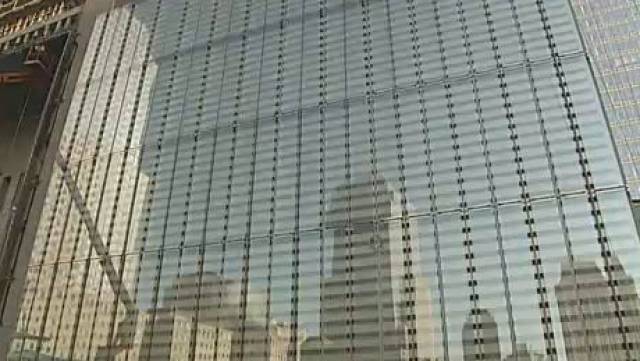 Thousands of energy-efficient glass panels are presently being installed at the base of 1 World Trade Center. Designed to maximize sunlight while keeping the inside of the building cool, the panels will also include LED lights.

Workers have begun installing thousands of energy-efficient glass panels at the base of 1 World Trade Center.
The panels, which will adorn the podium wall, are designed to maximize sunlight while keeping the inside of the building cool.
LED lights will be housed within the panels, which, according to officials, will give the base a look that is both visually pleasing and environmentally friendly.
“What it will do is make the building sparkle,” said Steven Plate, director of World Trade Construction. “We’ve really challenged ourselves intellectually and from a design, engineering and construction point of view to provide a median so people come here, they really know this is probably one of the most special buildings in the world.”
More than 4,000 glass panels will be used to cover the building’s base.