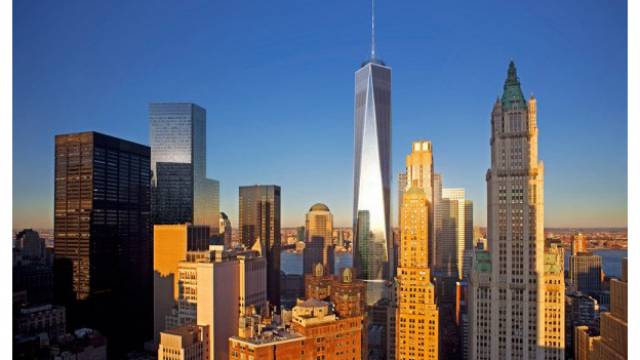 One World Trade Center is a 104-storey super tall skyscraper located in the Lower Manhattan area of New York City and is the main building of the new World Trade Center complex. The building, scheduled to open its doors for occupation in late 2013, features extensive use of green technologies.

One World Trade Center is a 104-storey super tall skyscraper located in the Lower Manhattan area of New York City and is the main building of the new World Trade Center complex. Designed by David Childs of Skidmore, Owings and Merrill, ground breaking took place in 2004 and the building, which features extensive use of green technologies both in its construction and in some of its functional features, should open its doors for occupation in late 2013.
Almost 75% of the building is “old,” specifically with reference to the building materials used, thanks to the intensive reuse of post-industrial materials in everything from its ceiling tiles to gypsum boards. According to the tower’s builders, Tishman Construction, this building method not only eases stress on resources, but also reduces the onsite environmental footprint.
One World Trade Center is also particularly friendly to the environment thanks to the minimal amount of cement used in its construction, thus greatly reducing carbon emissions. A material known as “Green Concrete” forms most of the building’s thick, reinforced walls, which is a result of environmentally responsible production methods that save over 30,000 gallons of water and eight million kWh of electricity.
One World Center boasts one of the world’s largest fuel cell installations, which are among the cleanest sources of energy available today. The PureCell system by ClearEdge Power is a phosphoric acid fuel cell that lowers energy costs and reduces emissions. In addition, the manufacturer claims that it offers 95% efficiency, has 10-year cell stack durability as well as a product life of 20 years. This massive installation uses natural gas in a combustion-free process, utilizing exhaust heat for cooling and heating, creating usable energy from potential waste.
One World Trade Center also uses green technologies is its water collection, distribution and conservation system. While the roof area of the tower is comparative limited compared to other types of buildings, New York City receives over 60 inches of rainfall annually, resulting in the potential for considerable rainwater reserves. The collected rainwater runs within its cooling, fire-suppression systems and the waterfalls to commemorate the victims of the 9/11 attacks. The site also has extensive landscaping, irrigated by the collected and recycled water.
The building’s designers have incorporated an impressive energy saving feature known as “daylighting”, which works through dimmers that automatically sense bright sunlight coming in on sunny days and lower the intensity of interior lights, reducing power consumption. The dimmers have been strategically located in all spaces that are within 15 feet of the building’s ultra-clear glass windows.
Overall, the designers and builders of One World Trade Center have created a sustainable structure that is both functional and modern, while honouring the memory of the destroyed towers. For this reason, the building will receive a LEED Gold Certification upon completion. This award recognizes the innovations that make it one of the most environmentally friendly buildings of its size worldwide.