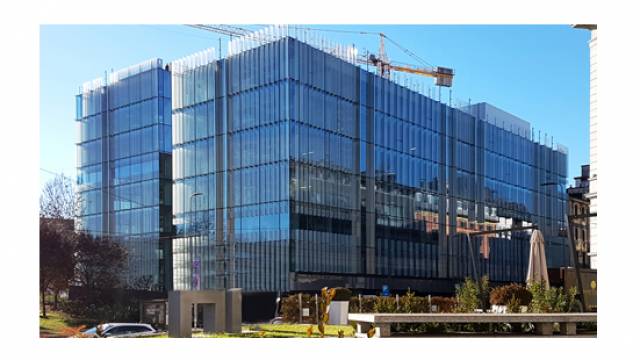 Tvitec has supplied the glass for Amazon’s new headquarters in Milan, northern Italy

Amazon’s new headquarters in Milan, northern Italy, has a new façade that includes more than 10,000 square metres of functional glazing and over 1,100 glass fins supplied by ISOLAR® partner Tvitec.

On 13 February, property services provider Colliers International announced the signing of a lease agreement in Milan with the logistics giant Amazon. This secured a new headquarters for Amazon in the up-and-coming business district of Porta Nuova in the northern Italian metropolis. Amazon’s move into the building will mark the completion of some very impressive renovation work. The new façade includes more than 10,000 square metres of functional glazing and over 1,100 glass fins supplied by ISOLAR® partner Tvitec Técnicas de Vidrio Transformado S.A. from Ponferrada in northern Spain. This achievement was recognised in the References Competition at the ISOLAR® Group’s 2017 annual conference in Berlin.
The Viale Monte Grappe building complex was the former headquarters of the multinational chemical engineering company Maire Tecnimont SpA. It was designed at the beginning of the 1970s by the architects Claudio Longo and Giulio Ricci and it is considered to be an architectural icon among Milan’s office buildings from this period. The complex comprises two parallel eight-storey buildings with connecting bridges on all flours. It is particularly well-known for its distinctive façade made from anodised aluminium and glass. The building is owned by an international property fund.
Milan-based architecture firm GBPA Architects was awarded the contract to design the complete refurbishment of the complex. Antonio Gioli and Federica De Leva have recapitulated the essential elements of their refurbishment project under the heading “regenerating the modern”. The internal structure of the building has been adapted to suit the modern day requirements of a large company. This has involved completely gutting the building. The vertical structures (including lifts) are being moved.
In addition, the former connecting bridges are being replaced with a new central section that includes a courtyard and an impressive main entrance. There will be roof terraces on each building. GBPA Architects are particularly committed to creating an innovative, high quality and sustainable building design, which is why the highest level of LEED (Leadership in Energy and Environmental Design) certification is an integral part of the project package.
In terms of the façade, an effort has been made to preserve the characteristic vertical elements, which have given the building its distinctive appearance. In contrast to its dark and heavy appearance in the past, transparent glass cladding shall be used to improve the relationship between the indoor and outdoor spaces and to dramatically improve the amount of natural light inside the building so that the principles of modern daylighting design can be applied. The vertical structures are being created by placing glass fins on the glass façade.
The company chosen to construct the new glass façades was Stahlbau Pichler GmbH from Bozen, primarily due to its extensive experience and reliable track record in developing and implementing sophisticated projects for modern architects. “In this instance, we chose a technology that would enable the façade elements to be prefabricated in our factory in Bozen, which would then only need to be mounted at the construction site,” explains Project Manager Ezio Zadra. He points out that the highest priority for the project is to ensure customer-specific requirements are developed in terms of functionality, aesthetics, energy efficiency, stability and longevity. “On-site logistics was also a challenge for us due to the size of the different components and the location of the construction site in the heart of Milan’s very busy streets.” Another important element that contributes to the success of the project is the competence and delivery capabilities of the glass suppliers.
“In terms of selecting the coatings, we jointly decided on a highly selective neutral solar control glass,” reports Tvitec Project Manager Ricardo Santos. “The requirements for the façade glass ultimately stipulated a structure with 10 mm heat-soaked toughened coated glass on the outside and 88.4 laminated glass with acoustic interlayers on the inside. When installing the façade elements, a section of insulated glazing was used as stepped glazing with processed edges at 45°. We have supplied 3,000 units of ISOLAR SOLARLUX® superneutral in total covering an area of approximately 10,000 square metres.
10 + 10 mm and 8 + 8 mm thick low-iron glass was supplied, thermally toughened and laminated for the glass fins, which also included different types of silk screen printing and fastening holes. “The requirements that needed to be fulfilled in terms of quality and the organisation of our production process were very rigorous,” added Ricardo Santos. “We always feel really proud and gratified when we successfully complete projects of this type.”
It is envisaged that the current number of 450 Amazon employees will move into the 17,500 square metres of usable space at their new headquarters in Milan by the end of the year. There will be enough space to accommodate up to 1,100 employees in the future. “Today is an important step for Amazon in Italy,” announced François Nuyts, Country Manager for Italy and Spain on signing the lease agreement. “We are very pleased that this extraordinary building will become the home of our talented team and for everyone who will come to be part of our team.”
The new glass façade is the most visible feature from the outside of one of the most impressive building refurbishments that have ever been undertaken in Milan. The glass façade is made from glass supplied by ISOLAR® partner Tvitec Técnicas de Vidrio Transformado S.A., which has been awarded a prize by the ISOLAR® Group in the “Representative Works” category of the “References 2016” Competition.