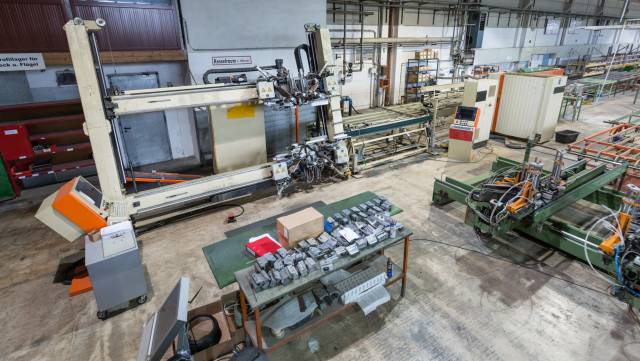 A total of 5,000 line items, such as production machines and plants, are being auctioned in the wake of the bankruptcy of the window and door manufacturer PaX Stabil GmbH.

During the three-day online auction at aurena.at, starting on April 26, 2016, machinery for the production of plastic, wooden and aluminum windows as well as service vehicles, shelving systems, production equipment and tools will be sold.
PaX Stabil GmbH near Leibnitz, one of the largest window manufacturers in Austria, was a producer of plastic and wooden windows, wood/aluminum windows and aluminum front doors. The site ceased operations at the end of November 2015, and now the entire production equipment, a total of 5.000 line items, is being auctioned.
Window and door manufacturing machines, tool items, forklifts and trucks, shelving systems as well as pieces of office furniture will be sold as part of an online auction on April 26-28, 2016 at aurena.at.
Entire production lines as well as individual machines made by manufacturers such as Elumatec, Rotox, Rapid, Hollinger, Schirmer, SAC, Gubisch, etc., are all up for sale. The auction also includes vehicles, trolleys and containers, tools and small machinery, shelving systems as well as the entire office equipment.
In addition to specific industrial machinery, the PaX Stabil GmbH auction thus presents a whole range of bargains for small businesses, carpenters and private persons.
The highlights of the auction include:
–        Actual four-head welding machines
–        Gubisch window production line
–        Palfinger truck-mounted forklift
–        Large batch of Gealan PVC profiles
All line items are listed online at: aurena.at.