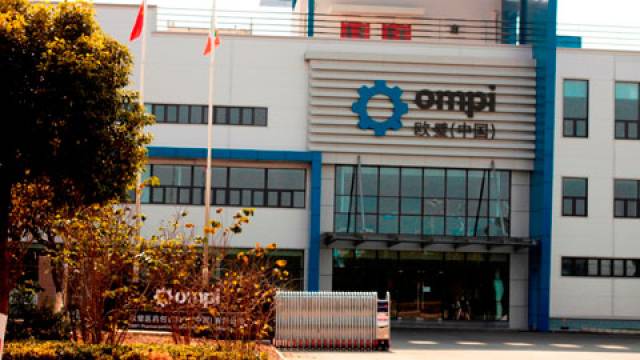 Stevanato Group (Piombino Dese – Padua, Italy), an international leader in the production of cartridges for insulin and glass containers for pharmaceutical use through its Ompi brand, today strengthened its presence in Asia Pacific by officially inaugurating the new Ompi of China production plant in Zhangjiagang (China). The event was attended by the President of Stevanato Group, Sergio Stevanato, Vice President Marco Stevanato, the Consul General of Italy in Shanghai Stefano Beltrame, and representatives from the Jiangsu and Suzhou governments.
The construction of the new production plant in China, for which Stevanato has already invested 27 million Euro (288 million RMB), represents an important step in the growth and internationalisation strategy that the Group has been pursuing for several years. Through this strategy, the company will cover each relevant territory thoroughly by opening new sales offices and new production plants in the various regions to which it exports the most, such as North America, South America and Asia Pacific, in order to supply these markets directly.
“China is a very important market due to its extraordinary economic growth and location in the center of this region in which Stevanato Group expects to grow and invest in the coming years, and for this reason it is indispensible to our overall strategy,” said Marco Stevanato, Vice President of Stevanato Group.
Stevanato selected Zhangjiagang as the location of this production hub because the region’s industrial infrastructure guarantees a solid and efficient production platform. Additionally, the high level schools in the area mean Stevanato can depend on a pool of qualified personnel with skills that prepare them to work in a technologically advanced environment such as that of Ompi of China’s new facility.
“We want to contribute actively to the area’s development, both in terms of technological know-how in the production of glass tubes, and from a professional standpoint for workers at the plant. For these aims we have invested already and, on an ongoing basis, continue to invest heavily in both technology and also human resources,” Stevanato continued.
The plant in Zhangjiagang, in the province of Jiangsu – centrally and strategically located to distribute country-wide – covers a 30,000 m2 area (the plant occupies 8,500 m2, of which 4,000 m2 reserved for production lines and 1,300 m2 for the clean room area for the final packaging phase).  Once fully operational, at the end of Phase 1 (by the end of 2016) the plant will have 16 production lines featuring the most advanced technology for producing vials and cartridges, and will employ a total of 250 qualified people trained through rotation at other Group plants. At present, the plant employs 115 people.
All of the technology and equipment at the new plant in Zhangjiagang were designed and manufactured in Piombino Dese by Spami, a company under the Group’s Engineering Systems division, which manufactures machines for transforming and checking glass tubes, as was done for the production plant built in Monterey (Mexico) in 2008.
“Production at Ompi of China already began in November 2013, with the highest innovation and technological standards. Furthermore, the plant is ISO 9001 and ISO 15378 certified. Five production lines are currently operational, two for vials and three for cartridges. The site has been inspected and has passed the quality test of our most demanding customers,” explained Marco Stevanato, who is overseeing the internationalisation project.
“For Phase 1 of the project’s development, we have invested 27 million Euro (288 million RMB), while a further 13 million Euro (110 million RMB) investment will be set aside for completing Phase 2 which, from 2017, will consist of an additional 6,000 m2 of buildings, of which 1,500 m2 will be reserved for an all-new aseptic area.”
By the end of 2017, the complex will be able to produce 450 million glass vials and cartridges to meet the demands of local and multinational pharmaceutical companies. Between this year and the beginning of 2015, Stevanato Group expects it to reach about 80% of total production capacity, and should then become fully operational in 2016, following the completion of Phase 1.
Stevanato Group is currently the world’s leading manufacturer of cartridges for insulin used in diabetes treatment. The Group has a production capacity of over 3.5 million glass containers a year and boasts technological leadership in the development of machinery for glass tubes for pharmaceutical use.