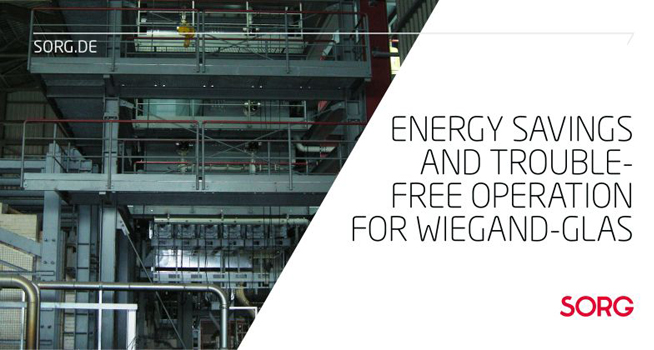 The first SORG batch preheater was installed in 2011 at Wiegand-Glas in Steinbach, Germany, on their first newly built furnace. The preheater, with dimensions for a capacity of 250 tonnes per day, was set up next to the melting tank due to the structural situation inside the building.

In addition to the preheater, all three elements of the Batch3 concept were implemented for the first time. The Batch3 concept in addition to the preheater, included the dust-tight EME-NEND® batch charger and the IRD® doghouse. The EME-NEND® batch charger eliminates dust around the furnace, and the IRD® doghouse for glazing the batch reduces dust inside the furnace.

After 10 years of trouble-free operation with only routine maintenance work required, the preheater was shut down and inspected in March 2021 before the planned reconstruction of the furnace. The inspection showed only minor wear on the heat exchangers and screws, confirming the flawless structural and technical design of the batch preheater. In close cooperation with Wiegand-Glas, the preheater was completely cleaned and worn parts were replaced. The exhaust gas routing was optimised based on the experience of 10 years of operation. Improvements were made to the batch supply, which was modified by EME to further minimise wear.

The re-commission took place at the end of October 2021, and the first operational results show that the preheater achieved its full performance- even with higher tonnage, and now has a further reduced amount of dust in the flue gas.

SORG and Wiegand-Glas are looking forward to another 10+ years of considerable energy savings, CO2 reduction and trouble-free operation with the furnace. The second batch preheater, installed at Wiegand in 2012, will undergo the same treatment in 2022.

SORG is currently processing an order for another batch preheater in Europe designed for an output of 450 tonnes per day.