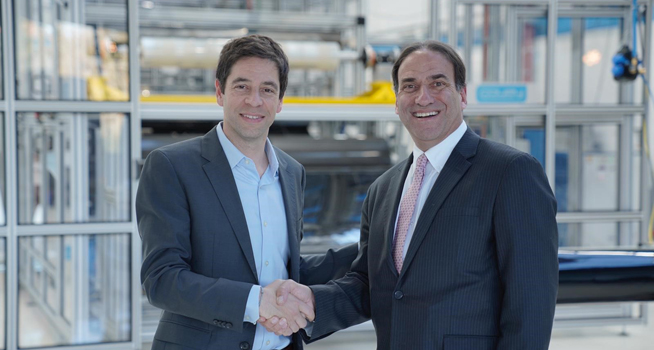 The custom designed roll-to-roll production line in Germany can produce one million square meters annually of SPD-Smart light control film up to 1.8 meters wide. Designed for the expanding needs of customers for SPD-SmartGlass, the machine offers various roll widths to reduce costs, and can offer laser patterning for custom designs with invisible lines when transparent.

Standing in front of the new 11 thousand square meter facility, Eyal Peso, CEO of Gauzy, noted: “Our LCG® SPD nanotechnology is revolutionizing mobility and smart cities, contributing to smarter light control solutions. We have invested millions of euros to build this state-of-the-art facility in Stuttgart, the heart of Germany, strategically because of the strong demand and our deep order pipeline, especially in the automotive, architectural, aircraft, train and marine glass industries that we have seen. We are honored to be bringing Israeli Innovation to the region, and have a deep sense of pride to be creating jobs and working with and alongside some of the finest people and companies in Germany.”

SPD-Smart light control film, invented and patented by Research Frontiers, is a key component in SPD-SmartGlass products. This film allows users to instantly, precisely and uniformly control the shading of glass or plastic products, either manually or automatically. Products using Research Frontiers’ smart glass technology are being used in tens of thousands of cars, aircraft, yachts, trains, homes, offices, museums and other buildings.

Joseph M. Harary, President of Research Frontiers noted: “This is indeed a milestone event for the smart glass industry. This is the world’s first factory dedicated exclusively to the production of SPD-Smart light control film. Its state-of-the-art production techniques have brought down the cost of SPD-Smart light control technology significantly, has shortened delivery times to customers, and have added new capabilities and functionality to the world of smart glass.”

The markets for SPD-Smart film are already well-established. Research Frontiers has licensed over 40 chemical, film, and glass companies which are selling products for the automotive, aircraft, marine, train, museum and consumer electronics industries. Gauzy’s established and growing network of over 55 glass fabricators worldwide brings additional synergies, infrastructure, and growth opportunities to the smart glass industry.

Research Frontiers patented SPD-SmartGlass technology is the same best-selling smart window technology that can be found on various car models from Daimler, McLaren Automotive, and other auto makers. The MAGIC SKY CONTROL feature, which is now in use on tens of thousands of Mercedes-Benz SLs, SLC/SLKs, Maybach and S-Class models around the world, and more recently on four announced McLaren models, uses patented SPD-SmartGlass technology developed by Research Frontiers to turn the roof transparent by electrically aligning tiny particles in a thin film within the glass. With the touch of a button, drivers and passengers can instantly change the tint of their roof to help keep out harsh sunlight and heat, and create an open-air feeling even when the sunroof is closed. Glass or plastic using Research Frontiers’ patented SPD-SmartGlass technology effectively blocks UV and infrared rays in both clear and darkly tinted modes, helping keep the cabin cooler, and protecting passengers and interiors while also enhancing security inside the vehicle. These benefits become even more important when a car uses large surface areas of glass, especially in warm climates.

Some of the other benefits of SPD-SmartGlass include significant heat reduction inside the vehicle (by up to 18ºF/10ºC), UV protection, glare control, reduced noise and reduced fuel consumption. Independent calculations also show that use of SPD-SmartGlass can reduce CO2 emissions by four grams per kilometer, and increase the driving range of electric vehicles by approximately 5.5 percent.