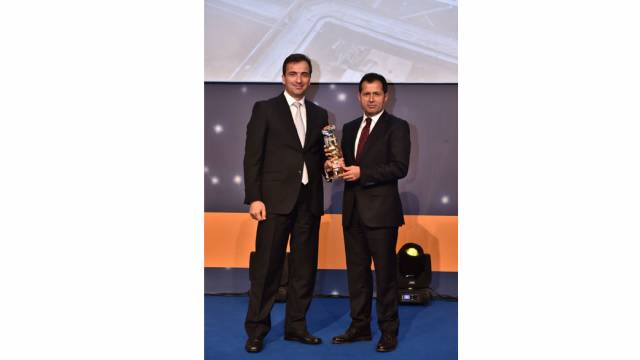 Sisecam has won the “ICCI Energy Award” with its “Power Generation from Waste Heat Project”. The awards are known as the “Oscars” for the Energy Industry.

A global player operating in four main fields of glass industry consisting of “Flat Glass”, “Glassware”, “Glass Packaging” and “Chemicals”, Sisecam Group’s subsidiary Sisecam Flat Glass has won the “ICCI Energy Award” with its “Power Generation from Waste Heat Project” launched by its Mersin Plant. The Awards are known as the “Oscars” for the energy industry.
At the ceremony held for the sixth time this year at Istanbul WOW Convention Center, Ziya Altunyaldiz, the Grand National Assembly Committee Chairman for the Industry, Energy, Natural Resources, Information and Technology presented the award to Serdar Gencer, Chief Corporate Development & Sustainability Officer, on behalf of Sisecam Group.
The Mersin Plant of Sisecam Flat Glass, which was rewarded in the category of “Waste Heat” with its “ORC (Organic Rankine Cycle) Power Generation from Waste Heat Project” launched in coordination with the Energy Efficiency Department, has won the “ICCI Energy Award” for its innovations in the glass industry and successful practices.
The Bursa-Yenisehir Plant of Sisecam Flat Glass, a Sisecam Group company, had also won the “The Most Successful Enterprise” award in 2014 in the category of “Energy Improvement Projects in Industry (EIPI)” with its “Power Generation from Waste Heat Project”.
Organized every year since 2011 and rewarding the best of the leading companies generating the power of Turkey, known as the Oscars of the energy industry in Turkey, the sixth “ICCI Energy Awards” Ceremony took place in Istanbul WOW Convention Center on May 2nd, 2017.
With the Energy Awards Ceremony which was set to take place a day before the opening of the International Energy and Environment Fair and Conference, ICCI 2017 brought together the energy industry leaders in Istanbul with many events on the first week of May this year.
One of the most established enterprises in Turkey, Sisecam Group is a global actor in business fields including all main areas of glass industry, i.e. flat glass, glassware, glass packaging and glass fiber, as well as soda and chromium chemicals. Today Sisecam, the world’s leading supplier of chromium compounds and the 10th largest soda ash producer in the world, is the 3rd largest glassware, the 5th largest glass packaging and flat glass manufacturer globally.
The Group, which has 44 production facilities in total, has manufacturing activities in Turkey, Germany, Italy, Bulgaria, Romania, Slovakia, Hungary, Bosnia-Herzegovina, the Russian Federation, Georgia, Ukraine, Egypt and India. With its 81 years of experience, nearly 22,000 employees, production in 13 countries, and sales in as many as 150 countries, Sisecam is a group at international scale and continues on its journey to become one of top three global producers in its all-main business fields.