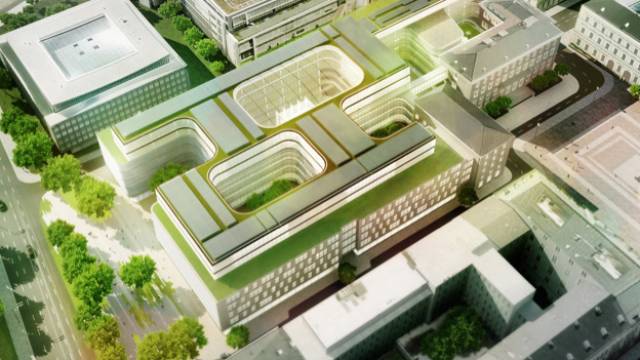 Together with Munich Mayor Christian Ude, Siemens President and CEO Peter Löscher has laid the foundation stone for the company’s new headquarters building, which will be completed on Wittelsbacherplatz in Munich by the end of 2015. The future inner-city complex will provide employees with a 21st-century working environment and be freely accessible to the general public at ground level. Siemens has set the highest standards for sustainability for its new headquarters, and will fulfil the criteria for minimum energy consumptions in buildings.
“For the first time since the company built its headquarters in Berlin Siemensstadt one hundred years ago, Siemens is laying the foundation stone for our new headquarters of the future,” stated Peter Löscher. The ceremony expresses Siemens’ clear commitment to Munich and the company’s home. Löscher also emphasized the spirit of cooperation between Siemens and the City of Munich.
“The Siemens campus will be an enrichment for Munich. A global company that doesn’t isolate itself, but expressly invites the public in – this is how it should be,” said Munich Mayor Christian Ude.
”The new headquarters will be a visible expression of the values that have made Siemens great and will continue to guide our company in the future: responsible, excellent, innovative,” added Dr. Gerhard Cromme, Chairman of Siemens’ Supervisory Board.