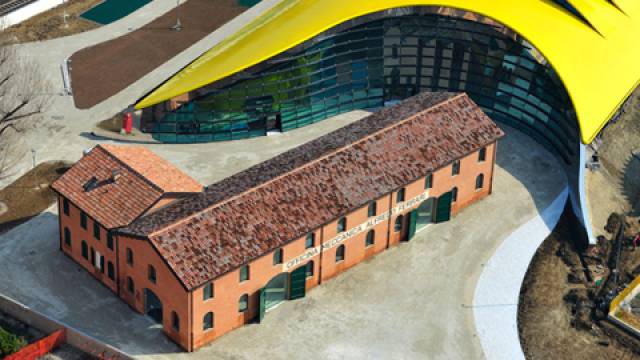 The visually stunning cable-stayed glass facade surrounding the recently-opened Enzo Ferrari Museum is another outstanding demonstration of the capabilities of SentryGlas ionoplast interlayer.

Today’s demand for special geometries and highly transparent building envelopes calls for innovative engineering solutions. Designed by Jan Kaplicky and Andrea Morgante of Future Systems in London, England, the 78 meter (256 feet) long, 45 meter (148 feet) wide Enzo Ferrari Museum in Modena, Italy has a geometrical shape and high transparency that are clearly inspired by sports car designs. The engineering philosophy on the project was to maintain a relatively simple geometry for the glass façade panels, which had to be assembled to adapt to the many different geometrical shapes by means of complex customised detailing. Italian engineering and architectural consultancy company Politecnica handled the façade design work.
The 11 meter (36 feet) high cable-stayed glass façade is geometrically defined by two intersecting conical surfaces, inclined towards the interior of the building by 12.5 degrees. The smooth, attractive curved shape of the façade was achieved by using straight cables and standard planar glass units. These had to be cut at specific angles in order to match the conical geometry.
The façade is supported by a 3D-curved circular hollow steel girder, which runs the entire length (62 meters, or 36 feet) of the building. This one meter diameter girder acts as a topside support for the cables of the façade. These cables not only support the glass units, but also transfer all the loads to the 3D-curved girder. The girder itself is supported by two hinged Y-shaped steel columns and braced by the steel roof structure.
A set of 32 millimeter vertical stainless steel cables support the flat insulated glass units. The glass make-up comprises a 10 millimeter fully tempered glass pane on the outside, with two 6 millimeter heat strengthened glass panes laminated with 1.52 millimeter SentryGlas interlayer on the inside. The cavity within the glass is filled with argon and a solar control coating enables an Ug rating of 1.0 watt per square meter.
Engineering and construction contractor for the project was Werner Sobek of Stuttgart. As Dr. Lucio Blandini, Principal at Werner Sobek commented: “For the Enzo Ferrari Museum, engineering the façade was a considerable challenge. Much attention was therefore paid to the deflection characteristics of the entire glass façade, as well as the warping of the most critical insulated glass units. This was partly achieved by optimising every single cable pretension force, which varied from 80 to 330 kilonewtons (18,000 to 74,000 pounds). However, SentryGlas also played a critical role here, particularly as it provided significant improvements in the load bearing strength of the glass facade. We therefore recommended the use of SentryGlas almost from the very outset of the project.”
For decades, interlayers made of polyvinyl butyral (PVB) have been the industry standard when producing laminated safety glass. Architects are well aware of the possibilities and limitations of such glass when used extensively in façade engineering, for roofing and window panels. In contrast, SentryGlas enables an entirely new approach because the interlayer is over 100 times stiffer and five times stronger than PVB. As a consequence, there is an almost perfect transmission of load between two laminated sheets of glass, even at high temperatures, leading to the excellent flexural behavior of the glass when under load – also under direct sunlight in high summer. Accordingly, laminates with SentryGlas show less than half the rate of deflection when compared to laminates with PVB, when under the same load, and thus almost the same behavior as monolithic glass of the same thickness.
As well as improved strength and stiffness, other benefits of SentryGlas include:
Safety: In the event of breakage, glass fragments remain firmly bonded to the interlayer, reducing the chance for injury
Security: SentryGlas can be used in glazing that withstands bullets, hurricane-force winds and even bomb blasts
Durability: SentryGlas is extremely durable and resistant to clouding, even after years of exposure
Design Versatility: SentryGlas can be used in glass manufactured flat or curved, including annealed, toughened, heat-strengthened, spandrel, wired, patterned and colour-tinted glass
UV control: SentryGlas is available with or without UV transmittance