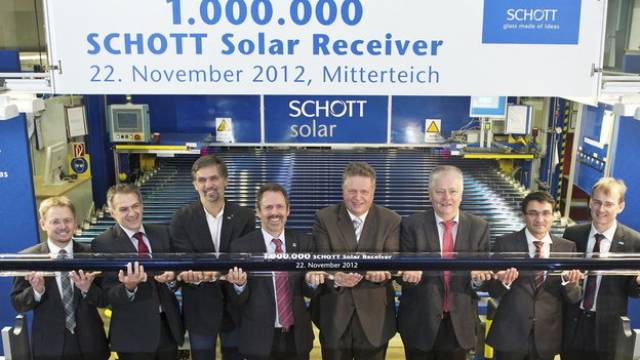 Schott Solar AG has manufactured its one millionth solar receiver, which is headed for one of the many solar power plants all over the world that employ CSP (Concentrated Solar Power) technology.

Schott Solar AG has reached yet another milestone in manufacturing high-tech solar receivers. The one millionth solar receiver left the belt on 22 November in Mitterteich, Bavaria. Like its predecessors, it is headed for one of the many solar power plants all over the world that employ CSP (Concentrated Solar Power) technology. Once installed, these receivers convert concentrated solar radiation into heat that is used to produce steam initially and then to generate electricity inside a steam turbine. Entire cities can then be supplied with sustainable energy. “This important milestone underscores our leading position in the CSP market,” says Dr. Hans-Joachim Konz, a member of the Board of Management of Schott AG.
Advanced technology from Schott has been contributing to the commercial success of solar thermal power plants since the 1980s. If you were to line up all of the solar receivers that Schott Solar has manufactured to date, this line would extend for a distance of 4,000 kilometres. The technology group exports its high-tech product to all regions of the world from the two Schott plants in Mitterteich (Bavaria) and Aznalcóllar, near Seville (Spain). Today, solar power plants “powered by Schott Solar” are located in Spain, the US, Morocco and Abu Dhabi, for example. Only recently, the company shipped 17,000 of these receivers for the very first CSP installation in the sunny country of India.
CSP technology is considered to hold great promise for the future because it guarantees the stability of the power grid. The reason is that energy can be stored easily as heat and then be fed into the grid as needed. CSP solar power plants can thus generate electricity even long after the sun has gone down or when clouds get in the way of the sun. This allows for load management in power grids. The entire CSP market is expected to account for an annual market volume of EUR 15 billion over the next few years. According to the US National Renewable Energy Laboratory, roughly 60 CSP power plants are already connected to the grid in various regions of the world. Another 40 have now reached the construction or concrete planning phase.
The question of how much solar energy a receiver can absorb and convert into heat is crucial to the efficiency of a solar power plant. In this respect, Schott stands for the highest efficiency and durability with its products. By implementing new coating and design measures, Schott Solar was able to increase the efficiency of its receivers by several percentage points in recent years – a leap that can be worth millions of euros during power plant operations. Now, the company has gone even one step further by introducing a noble gas capsule. This device, that can be opened at any time during power plant operations, binds substances that have become detached during the many years that a plant is in operation that can have a negative effect on the efficiency of the receivers. “The noble gas capsule is a measure that extends the service life of a receiver so to speak. It allows for the power plant to continue generating electricity efficiently even many years after it has already been written off,” Schott Board member Hans-Joachim Konz explains.
By continuing to pursue an ongoing innovation process, Schott will be able to contribute to making CSP technology even more cost-efficient in the future. “We see potential at many different levels,” Konz notes. “On the one hand, in developing new heat transfer media. Solar fields will either generate steam directly or use molten salt as a heat transfer medium in the future in order to be able to operate the power plant process at at least 500°C and thus achieve higher efficiency. In addition, it looks as if we will be able to use even larger receivers in many of the more recent power plants that are now being planned. This would increase the active surface area and thus enable the receiver to convert even more sunlight into heat. Nevertheless, we also see immense potential in optimizing the solar field, in other words improving how the receiver, mirrors and support structures interact.” This is how the company plans to help lower the costs of generating solar electricity. Schott is open to working with partners in order to achieve this objective.