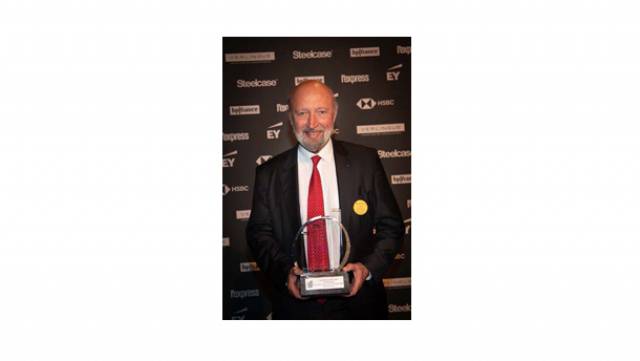 Loïc Quentin de Gromard, head of the Saverglass Group, is the 2018 Entrepreneur of the Year

Loïc Quentin de Gromard, President of Saverglass Group, has received the 2018 Entrepreneur of the Year Award.

At a ceremony in Lille bringing together all the economic players in the Northern Region, the 2018 Entrepreneur of the Year Award was presented to Loïc Quentin de Gromard to recognize his achievements at the head of the Saverglass Group, which he has led for over 30 years.
The Entrepreneur of the Year Award recognizes an SME manager for his or her exceptional career and company performance.
Each year, this award honours committed women and men who innovate, create value and jobs in their territory. It highlights exceptional careers and personalities: business leaders who prove that it is always possible to progress, innovate, create value and create jobs. Drivers of French growth and competitiveness, they foster confidence and the desire to do business.
By awarding the 2018 Entrepreneur Prize to Mr Loïc Quentin de Gromard, the jury wanted to acknowledge the continuity of the Saverglass group’s performance (+10% growth per year on average over the past 30 years) as well as its international development.
From a critical situation 33 years ago, Saverglass is now present industrially on 3 continents, selling in 80 countries to more than 26,000 customers.
“I am happy and proud of this trophy, which recognizes, first and foremost, the success and merit of all the employees of the Saverglass Group,” commented Loïc Quentin de Gromard.
When asked about the keys to his success, he recalled the values he promotes within the company, namely “a high standard shared by all, respect for others, and the desire to make them grow.” And adds: “We don’t work at Saverglass for one boss, the boss is rather at the service of the other”.
The Entrepreneur of the Year Award has been organized for 26 years by EY and awards each year the most successful entrepreneurs in France. It is awarded in seven major regions (East, Ile-de-France, South-East, North of France, West, Auvergne-Rhône-Alpes and Grand Sud) and 9 categories, the most prestigious being the Entrepreneur of the Year. Regional winners compete for the National Award in their category.
Saverglass, a French industrial group specializing in the manufacture of glass bottles and vials for fine wines and high-end spirits, employs nearly 3,200 people in France and around the world (3 glass production sites and 3 decoration sites in France, 1 site in the United Arab Emirates and 1 production and decoration site in Mexico).
The Group, based in Feuquières (Oise, France), has generated sales of EUR 430 million in 2017. With its expertise in glass and decorating, renowned for its innovations, product quality and design, Saverglass is today the preferred partner of high-end spirits and fine wines brands around the world.