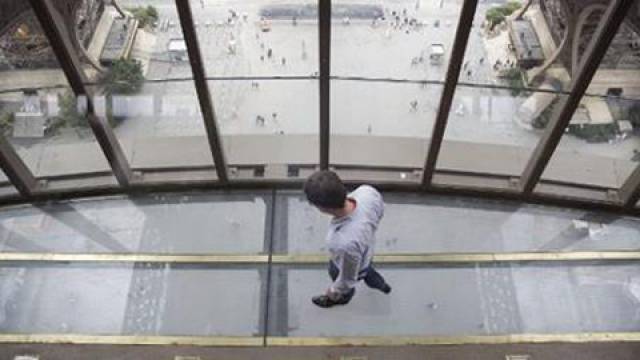 Saint-Gobain’s anti-skid glass tiles were installed on the first level of the Eiffel Tower, offering visitors a unique view of the Tower.

Saint-Gobain has provided the first level of the Eiffel Tower in Paris with a floor made of anti-skid glass tiles. Located 57 meters above the ground, this space offers visitors a double attraction: a fabulous view of the city as well as a unique view of the Tower itself.
For the redevelopment of the first floor of the Eiffel Tower, the architectural firm Moatti-Rivière, commissioned by SETE (the company which operates the Eiffel Tower), has offered a new way of viewing the city and transformed the space into one of the most spectacular places in Paris. This was accomplished by installing clear glass guard rails around the Tower’s central opening and, behind these barriers, a path of transparent glass measuring 1.85 meters at the widest point. At a height of 57 meters, visitors have the impression of walking in a void above the overhang vantage point of the first floor. This unprecedented improvement has added considerably to the appeal of the first floor.
This project represented a technical exploit. Saint-Gobain had to develop a special product for the glass floor (128 square meters) and carry out very detailed studies bearing on the characteristics of the glass and the type of anti-skid coating to use. The floor had to remain as transparent as possible and the slip potential had to be minimized, which is why a pattern of dots (enamel and abrasive particles) was screen-printed on the upper surface of the glass.
It took 18 months of R&D to conceive a high-quality screen printing process that would deliver excellent mechanical resistance and allow the product to keep looking attractive during use.
Glassolutions, a Saint-Gobain subsidiary, developed and manufactured the 64 LITE-FLOOR XTRA GRIP glass tiles used for the floor. The tiles were made by laminating three sheets of glass with two high-strength films. The total thickness of this composite is 32 millimeters, giving it a load-bearing capacity of 500 kilograms per square meter.
The anti-skid LITE-FLOOR XTRA GRIP glass floor tiles were produced by Glassolutions at its Eckelt Glas plant in Austria. This plant specializes in processing glass for large architectural projects all over the world. Its major credentials include the TKTS ticket booth in Times Square in New York, the New Acropolis Museum in Athens, and Swiss Re´s London office.