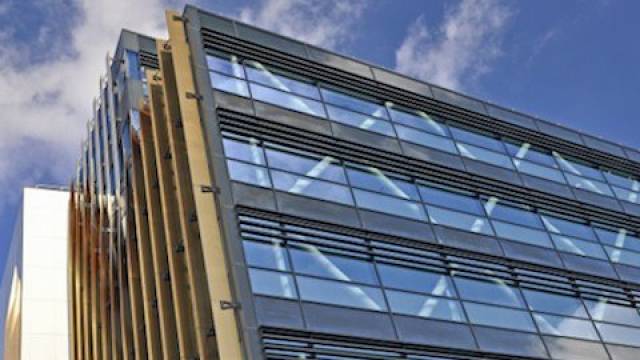 Forbury Place is one of the UK’s first projects to feature the Saint-Gobain’s SGG COOL-LITE STADIP SKN 165.

The project required high performance solar control with additional security, safety and acoustic benefits and SGG COOL-LITE STADIP SKN 165 was able to meet these multiple performance requirements within a single product.
The energy performance required played a major part in the design and construction of the building. SGG COOL-LITE STADIP SKN 165 was used, alongside a bespoke frit design on each of the elevations, to help reduce the solar heat gain of the building’s main office and reception areas and subsequently helped reduce the building’s overall cooling loads and CO2 emissions. Along with the product’s excellent aesthetics, the perfectly flat facade (due to the use of annealed laminate) also helped achieve the architect’s intended vision of the completed project.
Forbury Place is no ordinary office development – the building’s vertical fins create the illusion of movement as you walk past the structure. The design also incorporates a ‘diagrid’, the powerful diagonal form providing unique visual branding. The design creates a distinctive office building which primarily features a glazed facade that incorporates SGG COOL-LITE STADIP SKN 165 to provide neutral aesthetics, high performance solar control and safety/security benefits. The glazing aesthetics make a significant contribution to the building’s unusual exterior appearance.
It was essential that the correct glazing calculations were carried out on the project and Daniel Harrendence, technical specification manager for Saint-Gobain Glass, was involved at a very early stage to offer comprehensive technical guidance. “With its bespoke requirement of high performance solar control and laminated benefits, we successfully calculated and ensured that the glazing design element did not have a detrimental effect on the glazing’s thermal performance. By incorporating SGG COOL-LITE STADIP SKN 165 on our standard base substrate SGG PLANICLEAR, it helped significantly reduce the chances of thermal breakage and ensured the project was a success,” he said.