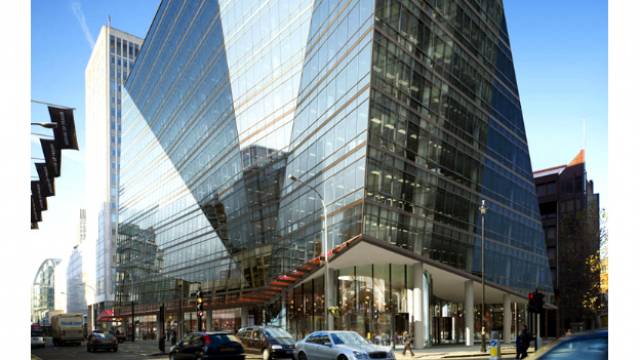 The newly completed 62 Buckingham Gate building, an 11-storey, prism-like construction, uses Saint-Gobain’s Cool-Lite SKN154 glass in both laminated and heat-strengthened variants to ensure a consistent appearance between the vision and shadow box zones.

The newly completed 62 Buckingham Gate building, hailed by Land Securities as the jewel of its extensive transformation of London’s Victoria district, owes its striking glazed façade to Saint-Gobain Glass.
Conceived by architects Pelli Clarke Pelli and Swanke Hayden & Connell, the 11-storey, prism-like construction houses 256,970 sq.ft (23,873 sq.m.) of office space with a further 15,250 sq.ft (1,417 sq.m.) for high-profile retail on the ground floor.
With main contractor Sir Robert McAlpine and façade fabrication by Lindner, the 16,000 sq.m. all-glass surface uses Saint-Gobain’s Cool-Lite SKN154 in both laminated and heat-strengthened variants to ensure a consistent appearance between the vision and shadow box zones. For the ground floor glazing the recently launched Cool-Lite Xtreme was chosen for maximum transparency combined with low solar heat gain.
Cool-Lite Xtreme offers 60% light transmission against 0.28 G-value, giving a selectivity of 2.14, the highest of all Saint-Gobain Glass’s commercial products. It is the first in a range of high-selectivity glasses, with others to be announced in the near future.
Saint-Gobain Glass, with its own extensive green credentials and the first company of its kind to undergo Life Cycle Assessments for its products, is in good company with the building’s many environmental and energy-saving features including rainwater harvesting, PV roof panels, green roof, green wall and ‘Excellent’ BREEAM rating.
The building is the latest of several undertaken by Land Securities as part of its regeneration of the Victoria area, and immediately adjacent to the previous flagship property 123 Victoria Street, from architect Aukett Fitzroy Robinson. This project involved the refurbishment of 5,000 sq.m. of external glazing using a combination of SGG’s 6mm Securit Cool-Lite SKN 165 II, chosen for its neutrality, and 8.8mm Stadip Protect which was specified to provide additional safety and security.
According to Land Securities: “62 Buckingham Gate represents one of the next big steps in our regeneration of Victoria, building on the success of nearby Cardinal Place and working in tandem with our residential development at Wellington House and longer-term plans for Victoria Circle.”
“Even taken in isolation, this would represent a major new arrival in Victoria. Seen in context with our work across Victoria, it is part of a transformation that will be felt for decades to come.”