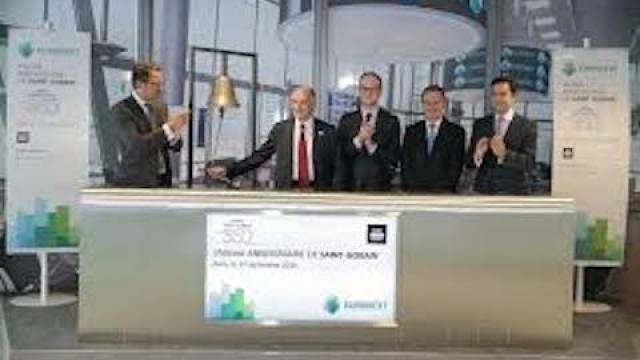 Euronext, the primary exchange in the Euro zone recently celebrated the 350th anniversary of Saint-Gobain, whose Chairman and CEO rang the bell opening trading on Euronext Paris to mark the day.

Saint-Gobain is the CAC 40 index’s oldest component stock and has been one of the world’s largest manufacturing companies since its earliest days. The company was founded in 1665 and has been financed solely by private capital with the exception of the years from 1982-1986, when it was nationalised. Listed since 1902, it has been a component of the CAC 40 since the index was first launched in 1988. Today Saint-Gobain came to the new premises of Euronext Paris to celebrate its 350 years in business and 113 years on the market.
The world leader in the habitat and construction market, Saint-Gobain designs, manufactures and distributes high-performance and building materials that bring innovative solutions to the challenges of growth, energy efficiency and environmental protection. It reported 2014 sales of €41 billion, is present in 66 countries and has over 180,000 employees.
Pierre-André de Chalendar, Chairman and CEO of Saint-Gobain, said: “It is an honour to ring the opening bell for Euronext Paris markets today. While Saint-Gobain is the oldest component stock in the CAC 40 index and one of the oldest companies in the world, our longevity is above all a promise for tomorrow: over the years we have successfully navigated highs and lows, and can now look to the future with confidence. Our experience is a source of strength in that it gives us both a long-term view and the responsiveness we need to adapt to a changing world—including new conditions and new challenges—through investment and innovation. We are proud to be celebrating our 350th anniversary this year. Our past would not have been possible without the men and women who made us what we are today.And I would naturally include in that group the partners and shareholders who have stood by Saint-Gobain from the very start—since the division of its capital in the sols and deniers of its beginnings, before we first listed on the Paris Bourse in 1902. I want to take this opportunity to extend my warmest thanks to them.”
Marc Lefèvre, Head of Listing at Euronext, added: “We are very proud to welcome Saint-Gobain, a world-class industrial leader with French roots, as it celebrates this exceptional anniversary with Euronext. Saint-Gobain’s growth reflects that of the stock exchange itself. The group is not only a model for industry, but also a source of inspiration for all companies that turn to capital markets to raise their profile, extend their international reach, and secure the capital they need to grow. Saint-Gobain’s historic presence as a component stock of the CAC 40, the flagship index of the Paris Bourse, testifies both to its exemplary growth and to investor confidence in its solid achievements.”