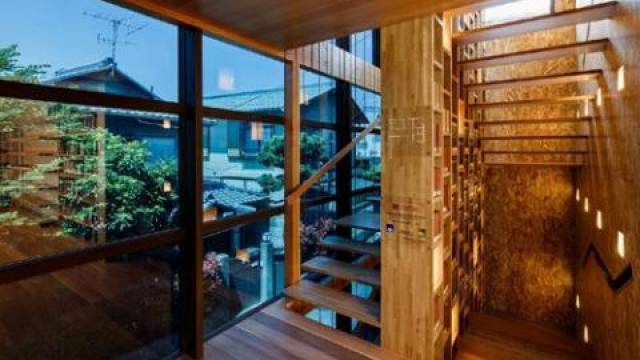 The École Française d’Extrême-Orient (EFEO) (French School of Asian Studies), in Kyoto, Japan, is using electronically tintable SageGlass® from Saint-Gobain to control natural light and heat gain in the eco-friendly building and to protect its extensive library of rare Asian books.

The Holcim Award-winning building, designed by the MIKAN architectural firm, is the newest of 18 research centres across Asia that supports interdisciplinary research on Asian civilizations. The Kyoto Centre is devoted to the study of Japanese history, literature, religion, anthropology, architecture and other humanities.

The architects wanted the building’s design to reflect the organization’s focus on history and research. Sustainability was also a key design objective. Consequently, the structure merges state-of-the-art technology with traditional Japanese artisanship.

Because the Centre was built on a narrow site closely surrounded by neighbouring buildings on three sides, the street-facing façade was the only source of natural light, and served as the prominent architectural design element. It consists of a three-story curtain wall of SageGlass dynamic glass that exposes people outside to its beautiful Japanese post-and-beam construction and woodwork, as well as its giant staircase that also serves as dramatic bookshelf for the EFEO’s library.

Protection of these rare books was a key driver for selecting SageGlass, according to architect Manuel Tardits of MIKAN. “As a research institute, the Centre holds a library of more than 10,000 works on Asian social studies, especially Buddhism and Taoism, as well as other famed collections from donors. The EFEO did not want to use shades or blinds to obscure the external view of this important cultural and intellectual resource. SageGlass enables viewing of the library throughout the day by providing UV protection and variable tinting in response to the intensity of the western sun,” he said.

SageGlass also helped MIKAN achieve its design objectives for energy efficiency and maximizing natural light for the benefit of researchers inside. SageGlass is electrochromic glazing which tints automatically to optimize daylight, indoor/outdoor views and comfort while preventing glare, fading and heat gain.

The combination of using sustainable building technologies like SageGlass with traditional Japanese woodworking methods helped the Centre to win a 2014 Holcim Award for Sustainable Construction. The Holcim jury said that the project is “an ideal example of how to combine high-tech and low-tech construction in contemporary building practice. Bringing the ‘old’ and the ‘new’ together requires a specific sensibility, based on an understanding of architecture as a form of research. While looking at history, future solutions are sought, as an approach adhering to the fundamental mandate of the institution as a research centre.”

Saint-Gobain donated SageGlass and other advanced building materials to support construction of this important research facility.