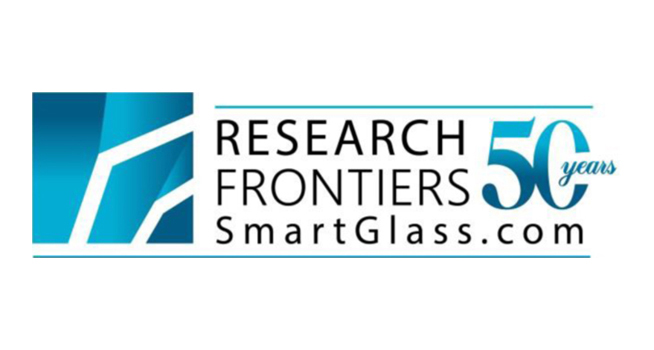 SPD-Smart light control film, invented and patented by Research Frontiers, is a key component in SPD-SmartGlass products. This film allows users to instantly, precisely and uniformly control the shading of glass or plastic products, either manually or automatically at the touch of a button. Products using Research Frontiers’ smart glass technology are being used in tens of thousands of cars, aircraft, yachts, trains, homes, offices, museums and other buildings.

Eun-sik Park, CEO of Glatic, said, “Glatic’s mission is to reinvent the future of glass technology to make it easy and affordable to add smart glass to building and vehicle environments to improve how we live. Research Frontiers’ SPD-SmartGlass had the best performance, and the best demonstrated reliability. In addition to the known benefits of SPD-SmartGlass in the automotive industry to reduce CO2 emissions by four grams per kilometre and increase the driving range of electric vehicles by 5.5 percent, our analysis shows that SPD-SmartGlass in the architectural markets can improve employee productivity, increase building values, and save energy including reducing lighting and HVAC hardware costs as well as energy consumption by at least 20 percent. Our product line uses SPD-Smart technology to achieve this, and is supported by our AI cloud-based control system, our intuitive user interface system with touch controls, and our intelligent app.”

Joseph M. Harary, President and CEO of Research Frontiers, noted, “Now that Gauzy Ltd. has opened its new factory in Stuttgart, Germany, that can produce SPD-Smart light control film up to 1.8 meters wide, we are expanding our licensee base to make sure that key areas of the world are supplied with SPD-SmartGlass technology for the architectural smart glass market.

“SPD-SmartGlass offers instant and uniform control of the tint of windows that permits them with the touch of a button or automatically using a smartphone, tablet, smart speaker, smart home systems, or other control devices to change tint from dark (blocking over 99.5 percent of light and 95 percent of heat) to clear, or any level in between. This saves energy, creates privacy, and increases comfort and security.”

Research Frontiers patented SPD-SmartGlass technology is the same best-selling smart window technology that can be found on various car models from Daimler, McLaren Automotive, and other auto makers. The MAGIC SKY CONTROL feature, which is now in use on tens of thousands of Mercedes-Benz SLs, SLC/SLKs, Maybach and S-Class models around the world, and more recently on four announced McLaren models, uses patented SPD-SmartGlass technology developed by Research Frontiers to turn the roof transparent by electrically aligning tiny particles in a thin film within the glass. With the touch of a button, drivers and passengers can instantly change the tint of their roof to help keep out harsh sunlight and heat, and create an open-air feeling even when the sunroof is closed.

Some of the other benefits of SPD-SmartGlass include significant heat reduction inside the vehicle (by up to 18ºF/10ºC), UV protection, glare control, reduced noise and reduced fuel consumption. Independent calculations also show that use of SPD-SmartGlass can reduce CO2 emissions by four grams per kilometre, and increase the driving range of electric vehicles by approximately 5.5 percent.