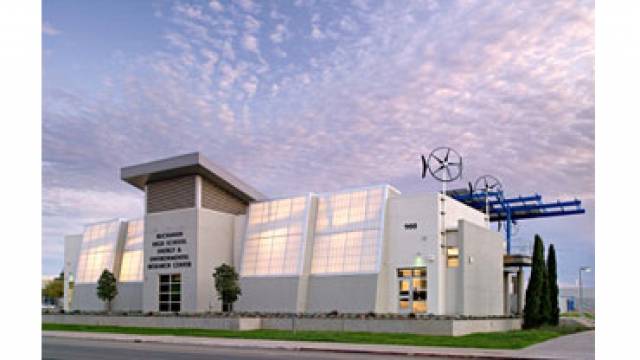 SOLARBAN® 70XL glass from PPG Industries is featured on the Buchanan Energy and Environmental Research Center, which earned a 2011 Excellence in Design Award in the educational category from Environmental Design + Construction magazine.

PPG Industries’ Solarban® 70XL glass is featured on the Buchanan Energy and Environmental Research Center in Clovis, Calif., which earned a 2011 Excellence in Design Award from Environmental Design + Construction (ED+C) magazine.
The USD 4.6 million building, which serves as a vocational high school for sustainable building and design, was designed by SIM Architects of Fresno, Calif. In addition to teaching traditional classroom curricula, the school functions as a hands-on laboratory for demonstrating the fundamental practices of energy and water conservation, recycling, and alternative forms of energy production such as wind and solar power generation.
John Smith, founding partner of SIM Architects and the project’s lead design architect, said he specified Solarban 70XL glass for the Buchanan Center because of its unique combination of high visible light transmittance (VLT) and excellent solar control performance.
“We designed the building so that a majority of the windows were facing north and south,” Smith explained. “That enabled us to control solar heat while bringing in as much natural light as possible. We also used a storefront window system by Kawneer with light shelves to bounce light even further into the building.”
Introduced in 2005 at the GreenBuild International Conference and Expo, Solarban 70XL solar control, low-emissivity (low-E) glass is engineered with a proprietary triple-silver coating that delivers an optimal balance of transparency and solar control. With VLT of 64% and a solar heat gain coefficient (SHGC) of 0.27, Solarban 70XL glass has a light-to-solar gain ratio (LSG) of 2.37 that is unsurpassed by competing products, even more than six years after its introduction.
At the Buchanan Center, Solarban 70XL glass works in combination with skylights, operable windows and several large translucent Kalwall® panels as part of a building-integrated lighting system. The system incorporates sophisticated sensors that turn lights on and off according to conditions.
The building also features super-energy-efficient insulated concrete form (ICF) walls; a green, vegetative roof; Xeriscape™ plantings and irrigation systems; and high-efficiency heating and thermal displacement cooling systems. Additionally, solar panels and wind turbines provide a small percentage of the school’s power.
Virtually all of the centre’s operating systems, including a radiant heat flooring system and the plumbing and ductwork, are left exposed and labelled so students can see how they work. Pupils also can monitor and measure the energy output of the solar and wind systems, and see how they are influenced by temperature, time of day, season and other environmental factors.
The Buchanan Center is expected to earn LEED® certification from the U.S. Green Building Council.