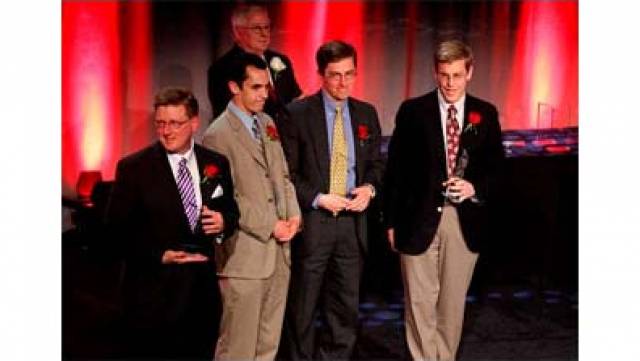 Scientists from PPG Industries received the Advanced Manufacturing Award at the 2012 Carnegie Science Awards in Pittsburgh for work on the development of Solarban® R100 glass. Adam Polcyn, Ph.D., Andrew Wagner, Ph.D., and Paul Medwick, Ph.D., helped engineer the neutral-reflective, solar control, low-emissivity (low-E) glass to provide better solar control performance than other neutral-reflective, low-E architectural glasses.
Introduced in 2010, Solarban R100 glass has a solar heat gain coefficient (SHGC) of 0.23 and visible light transmittance (VLT) of 42%. The resulting light-to-solar gain (LSG) ratio of 1.79 is as much as 29% greater than the LSG ratios of competing glasses. The ability of Solarban R100 glass to transmit light and block solar heat, while it meets the aesthetic demand for neutral-reflective glass, helps reduce the need for interior artificial light, heating and cooling, which together account for nearly 60% of energy consumption in US commercial buildings.
Glenn Miner, PPG director, construction, flat glass, said the number of architects and designers requesting samples was higher for Solarban R100 glass than for any new architectural glass product in the company’s history. He added that the technology behind the glass was the most impressive aspect of the product.
“These gentlemen were honoured for scientific innovation, not for the commercial success of this particular product,” he explained. “Together, they created a new way to sputter nano-layers of coating on a glass substrate, which enabled them to eliminate the visibility issues inherent in the coating materials while still achieving superior performance and manufacturability. As an award presented by scientists to scientists, it is an inspiring acknowledgement of the talented, creative and innovative people PPG has working to make its architectural glass products better every day.”
Carnegie Science Center established the Carnegie Science Awards programme in 1997 to recognize and promote innovation in science and technology achievements across Western Pennsylvania.