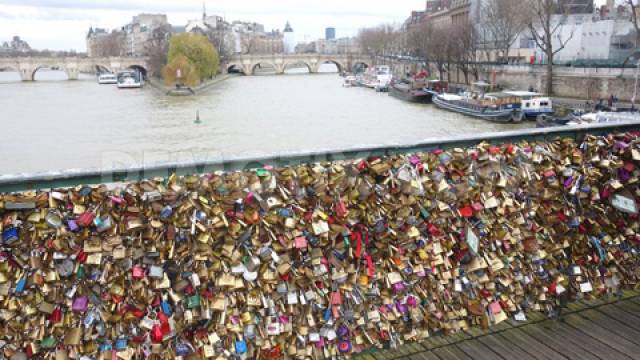 Who knew love could be so stressful for iconic architecture? Love locks are simple padlocks engraved with the names of a couple, which are then attached to historic landmarks. It sounds romantic and mostly harmless, but the growing practice has aggravated many citizens in Paris this year after a 2.4 meter section of metal fence collapsed under the weight of hundreds of padlocks, forcing authorities to close off the historic footbridge, Pont des Arts, for repairs. Critics, like the pair of American ex-pats who launched the online petition No Love Locks, say the practice is vandalism, while tourists believe it to be a harmless pledge of their love. Others claim that the bridge groans under the collective estimated weight of 45 tonnes of padlocks.
Now city officials believe they may have found a solution to their love lock problem: glass panels. This week the city replaced sections of mesh fencing on the city’s iconic bridge with two shatter-resistant and anti-glare glass panes. The glass panes are also treated with a special coating that prevents graffiti tagging. A third panel will be installed soon.
If the pilot proves successful, visiting lovers will no longer be able to pledge their undying devotion for each other with a padlock, as all 110 sections of the bridge’s metal fencing would be replaced.
This summer, in an attempt to discourage this distinctly tourist behavior, the mayor’s office launched a campaign asking couples to take selfies of themselves on the bridge instead, and to post it onto Twitter and Instagram. “Our bridges can no longer withstand your gestures of love,” read the message.