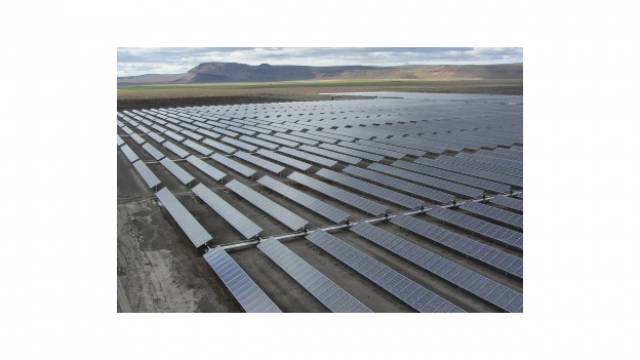 A 2.7-megawatt (DC) solar generation project has recently been completed at Owens Corning’s thermal and acoustical insulation plant, and is designed to supply approximately 6% of the plant’s annual electricity needs.

Owens Corning, the New York State Energy Research and Development Authority (NYSERDA) and Constellation have celebrated the completion of a 2.7-megawatt (DC) solar generation project at Owens Corning’s thermal and acoustical insulation plant.
The solar installation, which is the largest project to date under Governor Andrew M. Cuomo’s NY-Sun initiative, is designed to supply approximately 6% of the plant’s annual electricity needs. Constellation financed, built, owns and maintains the solar power system. Electricity generated by the system is purchased by Owens Corning under a 20-year power purchase agreement with Constellation.
Frank O’Brien-Bernini, vice president and chief sustainability officer for Owens Corning, said, “Owens Corning is committed to helping solve the world’s most pressing energy and climate challenges, and we are constantly seeking solutions that will materially contribute. This solar project represents our continuing efforts to implement programmes that advance our 2020 Environmental Footprint Goals, and we are proud to be part of a project that helps protect New York State’s environment.”
John B. Rhodes, president and CEO for NYSERDA, said, “Nearly two years after Governor Cuomo first announced the NY-Sun initiative, the Owens Corning large-scale solar project is a great example of how public-private partnerships are changing the landscape of New York’s clean-energy economy. We applaud Owens Corning and Constellation on this NY-Sun milestone achievement. This project is a testament not only to the state’s investment in expanding its renewable energy portfolio, but also to its commitment in providing cleaner, more affordable energy for New Yorkers.”
New York State Senator Neil D. Breslin said, “Clean, renewable energy is good for the environment and good for New York businesses. I congratulate Owens Corning, NYSERDA and Constellation on the completion of this project. Through the NY-Sun initiative we will continue to create clean energy jobs and a more sustainable future for our state.”
Gary Fromer, senior vice president, energy management programmes for Constellation, said, “Solar as a power-generation source is an attractive option for large-scale manufacturers like Owens Corning to achieve environmental goals and manage electricity costs. We applaud Owens Corning for being at the forefront of solar development in New York and Governor Cuomo’s NY-Sun Competitive Photovoltaic Program for creating the public-private initiatives that help make projects like this possible.”
National Grid, the utility serving the Feura Bush plant, previously awarded Owens Corning nearly USD 1 million in energy efficiency grants to help reduce its energy usage and carbon footprint.
“National Grid is committed to supporting our customers’ renewable energy goals,” said Ken Daly, National Grid president, New York. “The Owens Corning project required a high level of collaboration between National Grid and Constellation. National Grid is delighted to provide highly reliable electric service to Owens Corning, and we congratulate them for their environmental stewardship.”
The solar power system is composed of approximately 9,000 ground-mounted, photovoltaic panels located on more than nine acres. The system is expected to generate approximately 3.3 million kilowatt-hours of electricity per year (based on first year production). Generating the same amount of electricity using nonrenewable sources would result in the release of approximately 2,339 metric tons of carbon dioxide, or the equivalent emissions from 487 passenger vehicles annually, according to US Environmental Protection Agency data for the region.
Constellation owns and operates more than 147 megawatts of solar installations that have been completed or are under construction for commercial and government customers throughout the US. By structuring its solar projects as power purchase agreements or solar services agreements, Constellation offers solar installations that may require no upfront capital from customers and may provide fixed power costs that are less than projected market rates.