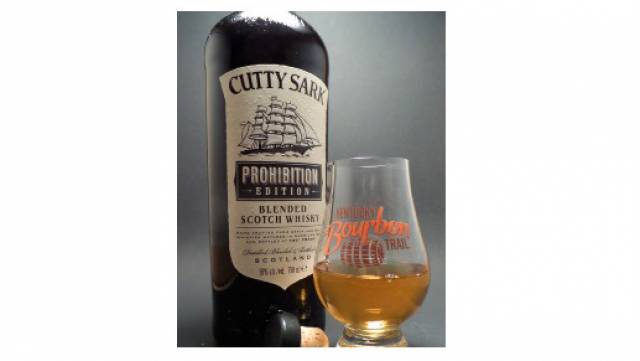 Cutty Sark Prohibition Edition, the first premium edition blended Scotch from the brand for the US market, uses a black glass bottle from O-I, giving the product highly desirable packaging for this added value line.

Edrington has turned back the clock to the 1920s and chosen a black glass bottle from O-I for the launch of Cutty Sark Prohibition Edition, the first premium edition blended Scotch from the brand for the US market.
Paul McLavin, marketing manager North-West Europe for O-I, said: “Cutty Sark Prohibition Edition marks the next exciting phase of our new product development partnership with the Edrington Group. From a starting point of the main range redesign, we have produced new bottles for Cutty Sark Storm and now this for Cutty Sark Prohibition Edition. As we continue to invest in creating more premium and sustainable options for our spirits customers, Edrington uses these facilities and our expertise to produce highly desirable packaging for the added value lines in its ranges.”
Jason Craig, brand director for Cutty Sark, said: “We spotted an opportunity for expansion through the US on-trade, where whisky chasers were becoming popular again thanks to TV programmes like ‘Mad Men’. We therefore set about designing a premium edition Scotch whisky to fit this niche. We wanted it to be even smoother than Cutty Sark Blend and have a higher than normal alcohol content – 100% proof rather than the 80% proof of our major competitors. We found the answer in Prohibition – an old-school, authentic Scotch, smooth on the tongue but with a big finish through the inclusion of different whiskies like The Macallan and Highland Park. Once the blend was created, the challenge was to find packaging which marked it out as something special.”
Prohibition was a time when Cutty Sark established itself in the United States and the new blend is a tribute to the notorious Captain William McCoy, who smuggled the brand into the country and whose reputation for fairness and supplying unadulterated liquor gave rise to Cutty Sark being referred to as ‘the real McCoy’.
Edrington saw drinkers pouring shots from black glass bottles with white labels on Prohibition era TV shows like Boardwalk Empire and sought to replicate this for the new edition. Traditionally, black glass is a very expensive option, but, thanks to the development of the Black Grouse Alpha Edition, Edrington knew there was a solution close at hand. Glassmaker O-I had installed technology to create black glass bottles cost-effectively at its Alloa plant, close to the company’s filling lines in Glasgow.
Packaging cost was still a challenge on a USD 30 whisky, so O-I and Edrington rationalised the options by utilising the same bottle shape, cork and capsule that were already in production for Cutty Sark Storm. Jason Craig said: “It’s amazing what black glass does to brand image. If you put the black version alongside a green Storm bottle, people say it looks bigger, seems more premium, feels a bit special. The cork seal also reflects the tradition of the time.”
To augment the large size impression and emphasise Cutty Sark Prohibition Edition’s authenticity, O-I has embossed “The Real McCoy” above the front label and “Since 1923” underneath it. The label itself, designed by Mountain Creative, features the familiar Cutty Sark clipper image, but produced simply in black ink on cream paper, another nod towards the 1920s heritage.
When the 750ml bottle was tested in the States, the consumer response was exactly what Edrington hoped for – ‘this is a premium shot’.
Edrington’s initial orders for the US have been matched by demand from other markets and the brand is launching in six countries, including the UK, in both 700ml and 750ml sizes. The company predicts it will be shipping up to 15,000 cases within three years.