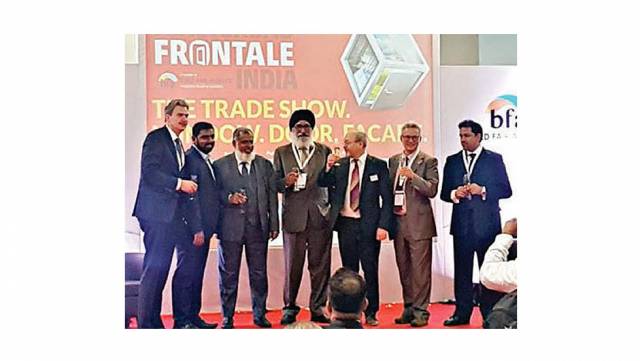 NürnbergMesse India and Zak Trade Fairs & Exhibitions are working together in the organization of trade fairs and exhibitions in Europe and in India.

In order to grow further, NürnbergMesse India and Zak Trade Fairs & Exhibitions have become partners in organizing trade fairs and exhibitions in Europe as well as in India.

As a result, both the companies are optimistic of being able to move their growth in the Indian market further forward, said Sonia Prashar, Managing Director at NürnbergMesse India.

Syed Ahad Ahmed, Director of Zak Trade Fairs & Exhibitions, believes that this strategic alliance can strengthen both the companies: “Our company is strong on the ‘Windows’‚ ‘Doors’ and ‘Façades’ themes – just like NürnbergMesse.

fensterbau frontale in Nuremberg with around 800 exhibitors from 37 countries and about 110,000 trade visitors is the world’s leading trade fair, we are proud to become trade fair and exhibition partners in Europe as well as in India,” says Ahad Ahmed.

The prime objective of the cooperation between both partners is to strengthen the market position for window construction fairs in India and together to grow even more strongly in this segment.

In India, the window and façade market is marked by enormous growth and, according to the sector experts, now has an estimated value of around USD 2.2 billion. In this context, aluminium products dominate the Indian window market with a share of around 50%, followed by wood, steel and PVC products.

The “Make in India” state initiative in particular has resulted in enormous impulses for the domestic construction sector and at the same time increased the interest of foreign investors in India. The ‘Windows’, ‘Doors’ and ‘Façades’ themes are thus also representative of the dynamic upturn in the Indian construction sector.

“At the end of the day, it is in particular our customers who benefit from this strong platform, namely exhibitors and trade visitors with the focus on the ‘Windows’, ‘Doors’ and ‘Façades’ themes in India”, agree Sonia Prashar and Syed Ahad Ahmed.

Zak Trade Fairs & Exhibitions Pvt Ltd is a leading congress and trade fair/exhibition organizer with the focus on the Asian market. Since 1994 Zak has organized over 520 events in India, Singapore, Sri Lanka, the United Arab Emirates, Qatar, the United States and Bangladesh.

NürnbergMesse is one of the 15 largest exhibition companies in the world. The portfolio covers some 120 national and international exhibitions and congresses and approximately 40 sponsored pavilions at the Nuremberg location and worldwide. The NürnbergMesse Group is present with subsidiaries in China, North America, Brazil, Italy and India.