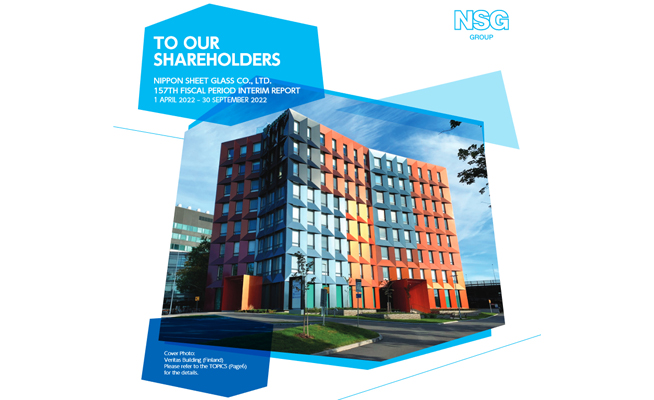 Summary of the First Half of FY2023 and Outlook for the Second Half
In the first half of FY2023, while NSG Group’s business environment continued to be severely affected by rising input costs, mainly energy costs, this impact was offset by continuous cost reductions and improvements in sales volumes and selling prices. Architectural glass business performed well in all regions, mainly in Europe, as the impact of rising costs was mitigated by price pass-through. Demand for solar energy glass was also positive. Automotive markets continued to be negatively affected by vehicle production constraint though there were signs that the magnitude of this issue was beginning to lessen towards the end of the quarter. In addition, the Group was able to offset part of the increasing input costs through price pass-through. Technical glass business also remains highly profitable, benefiting from the strong demand in many areas.

On the other hand, an impairment loss of JPY 48.8 billion was recorded for the entire amount of all remaining goodwill and intangible assets related to the Group’s Automotive business in Europe originally arising on the acquisition of Pilkington. This is mainly due to an increase in discount rates used in the impairment test due to rising interest rates in Europe. As there are signs of a recovery in automobile production volume and the realization of price pass-through, there is no change in the view that the medium-term prospects of this business to be positive.

While the Group needs to be cautious about the potential risk of an economic slowdown, Architectural and Technical glass businesses are expected to remain strong for the foreseeable future, and in Automotive business, the constraints on vehicle production are expected to alleviated gradually. The Group aims to achieve the operating profit forecast by achieving full-year operating profits in all business lines.

Regarding the expansion of value-added businesses along with “Business structure reform”, the Group has decided to newly install an online coating capacity to manufacture glass for solar panels in an existing float line in Malaysia (Scheduled to start production in FY2024).

In addition, construction of a new float furnace was completed in Argentina, where the market continues to expand, and production has started.

For “Transformation into more profitable business portfolio”, the Group has signed an agreement on the integration of the Group’s Automotive business in China with a major Chinese automotive glass manufacturer.

For “Restoration of financial stability”, even after posting the aforementioned impairment loss, the shareholder’s equity ratio remained over 15 percent, maintaining its financial target of 10 percent or above. The Group aims to promote the restoration of a further stronger financial base.

Dividends
Recognizing the distribution of profit to shareholders as one of its important management objectives, the Group has upheld a stable basic policy of declaring dividend payments on common shares based on sustainable business results. To that end, dividend payments by the Group will be determined in view of the enhancement of its financial status and accumulation of the appropriate level of retained earnings for future business growth.

Regretfully, the Group decided not to declare an interim dividend for this fiscal year, taking into consideration its business results and financial situations comprehensively.

The Group recognizes the importance of dividends to its shareholders and will concentrate its efforts to improve profitability with a view to the resumption of dividend payment as early as possible.