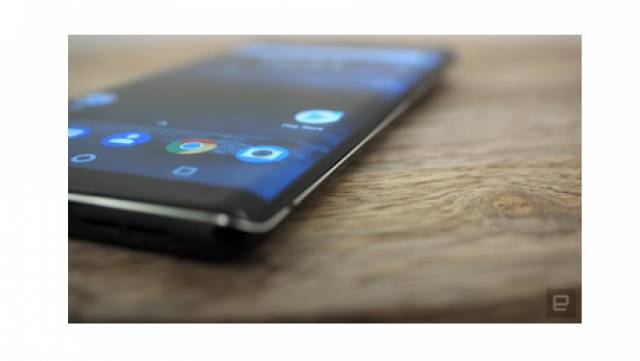 Nokia 8 Sirocco is a special edition of the Nokia 8 that will be launched in summer 2018, but it is not just the same phone in a new colour. It has, in fact, a completely overhauled design consisting almost entirely of glass.
However, in some ways, this is still the Nokia 8 but there are a number of differences to previous editions.
Where the Nokia 8 was splash-proof, the Sirocco edition has an IP67 water- and dust-proof rating. It now supports wireless charging and has slightly a bigger battery capacity of 3,260mAh. The cameras are different, with one 12MP wide-angle shooter and a 13MP camera with 2x optical zoom.
Despite the many changes to the spec sheet, design is the major differentiator here. The Nokia 8 was pretty standard fare: glass up front, aluminium unibody everywhere else. The Sirocco edition, however, is 95% Gorilla Glass 5. That other 5% is the stainless steel chassis that’s only exposed to the air around the perimeter – 2mm.
Because the front pane of glass is now curved, there’s also a new flexible display. The Nokia 8’s 5.3-inch LCD display has been replaced by a 5.5-inch, bendy OLED screen with the same 2,560 x 1,440 resolution. The display follows the curvature of the glass as it rounds each side to meet the stainless-steel seam.
The Nokia 8 Sirocco is an iterative upgrade rather than a brand new flagship, but it looks and feels like a whole other class of premium compared to its predecessor. It’s important to stress just how solid this phone is, too.
When the Nokia 8 Sirocco launches in early April, it will cost about EUR 749, compared to the starting price of the iPhone 8 Plus at USD 799, and the Galaxy S9 to be unveiled soon will probably be more expensive. But, considering the Nokia 8 went on sale for EUR 599 six months ago, the Sirocco edition might look a bit too expensive for some people who value the latest bleeding-edge hardware over a funky design.