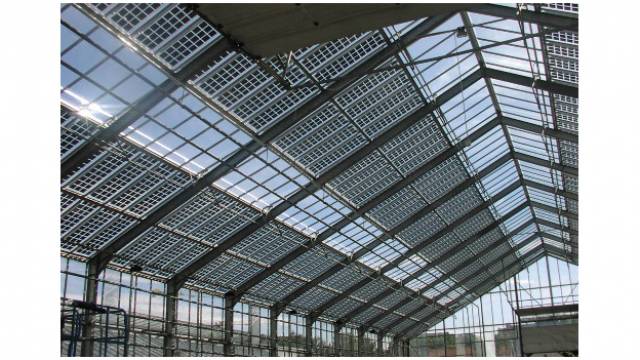 NanoMarkets latest report on BIPV glass projects growth from 2014 to 2019, with glass shipped to surpass 7.6 million square meters by 2021. The report also includes a detailed eight-year market forecast with breakouts by type of building and PV material.

The market for building integrated photovoltaic (BIPV) glass will grow from USD 823 million in 2014 to USD 2.7 billion in 2019 according to a newly released report by industry analyst firm NanoMarkets. The report also states that BIPV glass shipped will surpass 7.6 million square meters by 2021.
NanoMarkets latest report on BIPV glass includes a detailed eight-year market forecast with breakouts by type of building and PV material in both volume (MW and square meters shipped) and market value (USD millions) terms. Building types covered and forecast by this report include zero-energy buildings, prestige buildings, other commercial and government buildings, residential buildings and industrial buildings. And there are also market projections in the report for BIPV glass shipments in major national and regional markets.
The report also analyzes the BIPV glass strategies of leading glass and PV firms as well the community of firms whose core business is specifically developing and installing BIPV glass.
Finally, this report also discusses how BIPV glass supply chain is evolving and how BIPV glass will be able to improve its image with key decision makers such as architects, who are sometimes sceptical of the BIPV glass concept. In part this is about “playing up” the aesthetic advantage of solar glass (for example with tinted and coloured products) and by incorporating additional smart features such as hybrid light/photovoltaic capability.
“The BIPV glass sector has been dominated by prestige buildings, which will account for 90% of BIPV glass revenues in 2014. However, BIPV glass is a key enabling technology for zero net energy buildings which are expected to expand rapidly due to the growing number of mandates in both the US and EU. For example, EU Directives demand zero energy capability for all buildings by 2021. As a result, BIPV glass for zero net energy buildings will reach USD 1.1 billion by 2019 compared with USD 30 million today.
Thin-film PV, DSC and OPV are often touted as technologies that will revolutionize BIPV glass because of their light weight, flexibility and potentially low cost. However, NanoMarkets contends that the poor business conditions that have beset the whole solar industry for the past thee years have set back the development of less conventional PV technologies. As a result crystalline silicon will continue to dominate the BIPV glass sector until after 2019. The only other solar material that is expected to do reasonably well in the BIPV glass sector during the forecasting period is CIGS (copper indium gallium (di)selenide), which will reach around USD 245 million in revenue by 2019.
For now BIPV glass remains mostly a niche consisting of highly customized solutions; constructed on site or near to the site. Today, 90% of BIPV glass revenues come from customized projects. However, by 2019 this share will have declined to 60% as semi-assembled BIPV glass products come onto the market that can be easily be integrated into building fabrics without specialized expertise.
NanoMarkets tracks and analyzes emerging markets in energy, electronics and other area created by developments in advanced materials. The firm is a recognized leader in industry analysis and forecasts of the BIPV sector and the PV sector more generally.