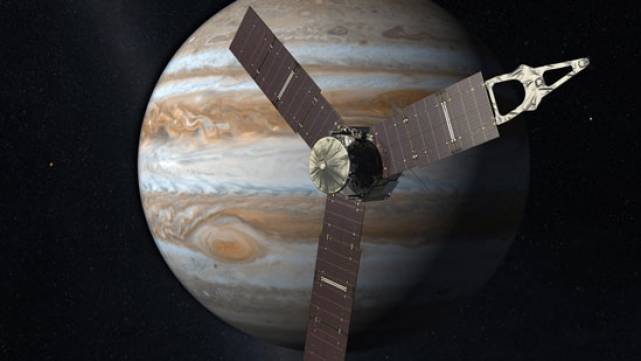 During the weekend, NASA’s Juno probe flew closer to planet Jupiter than any spacecraft ever has before. Astronomers hoped to receive some spectacular new shots of the planet and especially of its polar regions to gain new insights. Specialty glass from German SCHOTT AG endured that the camera lens was able to withstand the cosmic radiation for as long as possible and deliver brilliant images.

The unique thing about the planet Jupiter and one of the research topics of the mission is its strong magnetic field. The cosmic radioactive radiation accumulates at its poles. “The radiation at the polar regions is particularly strong. It is estimated that Juno will be exposed to the equivalent of 100 million X-rays taken at the doctor’s,” says Dr. Ralf Jedamzik, Principal Scientist at SCHOTT AG. “Without radiation-resistant glass, the camera would no longer be able to capture anything after only a short period of time,” he added.
This specialty glass from Mainz is put to use in the fixed focal length lens of JunoCam, one of the most important instruments on the probe. JunoCam was expected to take pictures of Jupiter’s cloud cover, rotating around its own axis and delivering two full 360° panoramic shots per minute. “The camera will probably suffer radiation damage with each orbit of the planet. Our glasses are intended to ensure that the objective holds up for as long as possible and that the quality of the images is not affected,” Jedamzik explains.
Astronomers hope the mission will provide new information about the planet’s atmosphere, but also its internal structure. They thus want to gain insights into its origin, which would also allow conclusions as to the origin of our solar system. Juno has been traveling now for almost exactly five years and entered into the planet’s orbit at the beginning of July 2016. It will orbit it almost forty times during the mission, which will still continue on until the spring of 2018.