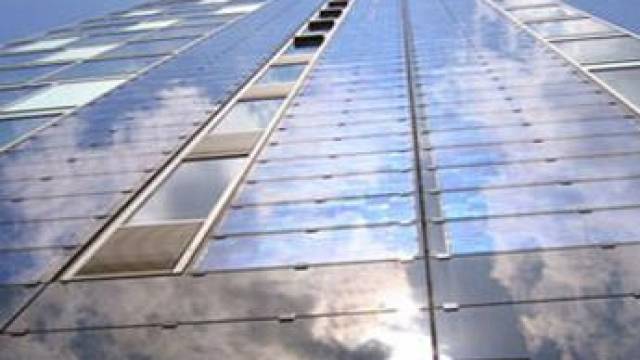 The most recent report from industry analyst firm NanoMarkets regards the building-integrated photovoltaics (BIPV) market. Entitled “BIPV Wall Markets – 2012”, the report quantifies the potential for wall-attached PV, repurposed BIPV roofing products, BIPV curtain walls and dedicated BIPV siding. It also discusses future directions for BIPV walling; from integrations with outdoor panel lighting to “solar paint.”
The report identifies the opportunities from the fastest growing segment of BIPV; BIPV walling products, and provides separate eight-year forecasts with breakouts by value (USD millions), volume (MW) and PV technology for each product type. Which types of buildings and which geographical regions will generate revenues and how this will change over time are also forecast.
BISEM, Dow Chemical, Evonik, Gloria Solar, Guardian Industries, Heliatek, Mage Sunovation, Onyx Solar, Pythagoras, RECKLI, Soladigm, Solar-Wall, Sol-Ice and Tata Steel, are among the companies mentioned in the report.
The most developed products specifically designed for BIPV walling are BIPV curtain walls; expected to reach around USD 250 million by 2016. For the next few years most of the revenues from “BIPV walls” are expected to come from conventional PV panels disguised by architectural features or from “repurposed” BIPV roofing.
NanoMarkets believes that sales of dedicated BIPV siding products will exceed USD 1 billion by the 2016-2017 period even if at the expense of conventional solar panels and walling products.
Dedicated BIPV walling products will have a positive effect for firms making flexible solar panels with CIGS and OPV/DSC technologies as they are lightweight and therefore ideally suited to wall installations. These technologies also have a smaller reduction in cell performance under indirect or shaded illumination and this again makes them highly suited to wall installations. Many of the suppliers of these types of PV panels have targeted BIPV walling and by 2016, almost 40% of BIPV wall products are expected to be built using CIGS or OPV/DSC.
NanoMarkets tracks and analyzes emerging markets in energy, electronics and other areas created by developments in advanced materials. The firm is a recognized leader in industry analysis and forecasts of the BIPV industry.