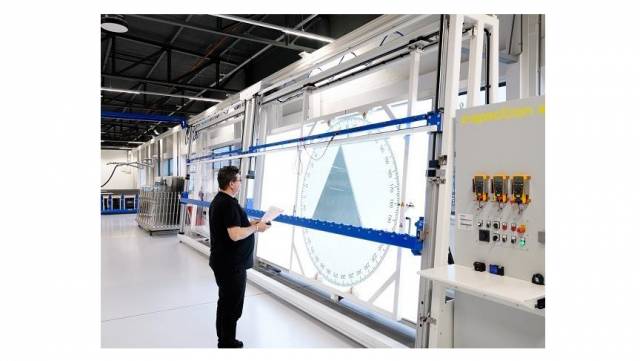 Merck has opened a new production facility for liquid crystal window modules in Veldhoven, near Eindhoven, in the Netherlands, with deliveries of the smart glass modules to start in 2018.

Merck, a leading science and technology company, has opened a new production facility for liquid crystal window modules in Veldhoven, near Eindhoven, in the Netherlands.
The investment of around EUR 15 million is a further step by Merck to expand its expertise as the market and technology leader in liquid crystals for displays by moving into other applications beyond televisions, laptops, smartphones, and tablet PCs.
In 2016, an independent business field was set up for liquid crystal window technology in order to achieve faster market penetration. Merck is the world’s first supplier of this window module technology, which in comparison with previous technologies, offers new application possibilities and regulation within seconds.
“This new facility is a milestone in our strategy to capture new attractive and future-oriented application fields for liquid crystals beyond displays,” emphasized Kai Beckmann, Member of the Executive Board of Merck and CEO Performance Materials, during the inauguration attended by around 100 invited guests from business and politics.
“We recently started taking orders from customers for modules that will be ready for delivery as of early 2018. The industry interest in liquid crystal windows we’ve seen so far is very positive.”
Globally, the demand for smart glass is rising. In particular, the construction and automotive industries are looking for long-lived elements that can be integrated both aesthetically and functionally in many shapes and colours.
Merck does not see itself as a competitor to glass and window manufacturers, but rather will supply the modules enabling them to make these smart glass elements, windows and façades. In addition, Merck assists architects, designers as well as window and façade makers in an advisory capacity.
In smart glass, liquid crystals regulate light transmission. It serves either as sun or privacy protection. Both variants, which respond within seconds, offer users maximum convenience.
In sun protection applications, exterior blinds and their costly maintenance and repair are unnecessary. The light transmittance of the windows can be lowered down to 5% and set in a continuously variable manner. Energy savings of up to 40% are thus possible with building climate control systems.
In both the dark and the bright state, the windows remain transparent and color-neutral and provide an unhindered view outside.
Of particular interest to architects is their tremendous flexibility in terms of size and shape as well as the possibilities of their colour design with no effect on transparency – a further advantage in addition to switching within seconds – over competing technologies.
The privacy variant also switches within seconds from transparent to opaque. It prevents outsiders from being able to look inside conference rooms, restricted production areas or residential buildings.
The liquid crystal materials, which are marketed under the licrivisionTM brand, are also to be used in vehicles in the future. Research is currently underway for further application possibilities, for instance in air and sea travel.
Long-term tests under real conditions show that innovative liquid crystal windows also live up to their promise in practical applications.
Since 2015, the liquid crystal windows in the western façade of Merck’s modular Innovation Center in Darmstadt have been operating perfectly even on hot summer days and icy-cold winter nights.
In September 2016, the sun protection and privacy variants were installed in the new OLED production building at the Darmstadt site.
Frost & Sullivan, a global consultancy, has also recognized the potential of the new breakthrough technology. At the end of October, it presented the “Technology Innovation Award” to Merck for its liquid crystal window technology.
According to the jury, as a key innovation driver with significant competitive advantage in smart glass, Merck has the opportunity to establish itself as a market leader.