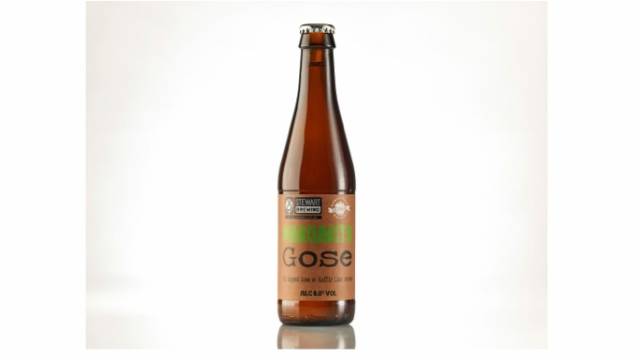 Two pioneering breweries have collaborated on a new Margarita-flavoured beer and chosen to sell it in an elegant bottle from Beatson Clark’s standard range of beer bottles.

Midlothian-based Stewart Brewing worked together with Hawkshead Brewery in the Lake District to brew Margarita Gose, a strong 6% beer made using New Zealand hops and kaffir lime leaves.
Beatson Clark’s standard amber 330ml Vichy bottle with a crown neck finish was chosen to give the beer a continental look on the shelf and to differentiate the beer from the two breweries’ other products.
Bruce Smith, Head Brewer at Stewart Brewing, said “We already use Beatson Clark bottles for our standard beers but we quite liked the idea of using something a bit more continental in appearance as it’s a traditional German beer style, and the Vichy fitted the bill for that.
“Gose is an unusual style, but quite a lot of craft breweries are coming out with their own modern interpretation of it now.
“There’s a lot of research involved and a bit of intuitive guesswork, but we got it right first time and went straight into production. It tastes pretty similar to the Margarita cocktail flavour that we were aiming for.”
Gose is a traditional German beer style brewed with at least 50% malted wheat. Dominant flavours include a lemon tartness, herbal characteristics and a strong saltiness.
The Margarita Gose is kettle-soured using lactobacillus and sea salt is added to balance out the tartness. Instead of the more usual coriander for flavour, Bruce used kaffir lime leaves and citrus New Zealand hops to replicate the flavour of the Margarita cocktail.
“As it’s a collaboration between two breweries,” continued Bruce, “we also thought having a unique bottle shape meant it wasn’t specific to either brewery. The label design is quite plain and understated, so having a nice looking bottle that’s a bit special allows the beer to stand out on the shelf.”