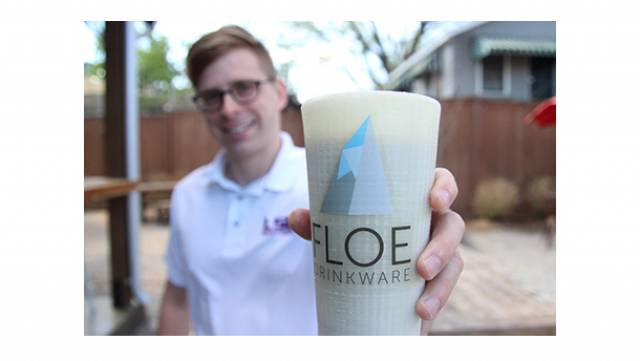 A graduate student at LSU has invented a new line of drinkware designed to keep beverages cold for longer periods of time.

One of the great challenges of outdoor life in south Louisiana is to keep beverages in a glass cold without the slippery condensation build-up. An LSU graduate student says he’s cracked the code, inventing a new line of drinkware designed to keep beverages cold for longer periods of time.
Sean King, a mechanical engineering graduate student, has obtained a provisional patent for what he’s calling FLOE Drinkware, according to an LSU news release. The 16-ounce glassware is engineered similarly to double-pane windows, comprising two layers of material separated by an internal vacuum sleeve to make ice last twice as long in a beverage and create little to no condensation on the outside of a glass.
King came up with the idea for the drinkware after a summer visit to a local restaurant with his family. Sitting on the patio with his parents, the Baton Rouge High School alumnus started thinking after his father said it would be great if someone invented a glass that could keep his drink cold.
“After about 15 minutes on the patio, our drinks were warm,” King says. “So, then I thought, I could do that. I actually know how to do that.”
The glasses have the advantage of being able to maintain an internal vacuum between the inner and outer sleeves. The technology, King explains, increases the amount of time you can enjoy a beverage without ice from a few minutes to an hour.
King still needs to obtain a utility patent for his invention. He plans on donating 15% of every FLOE product sold – including stickers and T-shirts – to the Flint Water Fund and the Appalachian Freshwater Initiative, both of which help people in their respective communities gain access to clean drinking water.