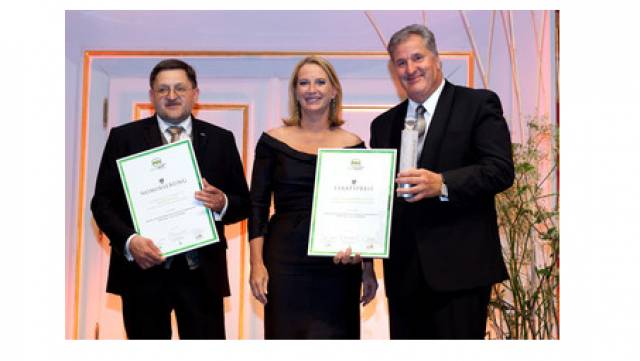 Lisec’s project, ‘Weight and Energy Efficiency Optimisation with Flat Glass Systems’ was selected as the winner in ‘Research & Innovation’ for the 2012 State Prize ‘Clean Technology Austria’.

On 22 May, Austria’s Minister of Technology Doris Bures presented the 2012 State Prize ‘Clean Technology Austria’ to Karl Gruber, CEO of the Lisec Group, and Leopold Mader, Head of Research and Development. Lisec was awarded the first prize in ‘Research & Innovation’ for their pioneering thin glass technology. This is the second time in five years that Lisec has won the State Prize.
On Tuesday evening, the State Prize ‘Clean Technology Austria’ was awarded for the third time. The winners of the three categories, with three nominees each, were selected by an independent panel of experts and were announced on 22 May during a gala dinner at the Hofburg Palace in Vienna. Austria’s Minister of the Environment, Nikolaus Berlakovich, presented the Prize in the category of ‘Environment & Climate’; the Minister for Economic Affairs and Energy, Reinhold Mitterlehner, presented the Prize for ‘Energy & Efficiency’; and Doris Bures, Minister of Technology, presented the Prize for ‘Research & Innovation’. This year a total of over 200 projects were submitted. The best project in each category was awarded the State Prize by the minister responsible.
Lisec’s project, ‘Weight and Energy Efficiency Optimisation with Flat Glass Systems’ was selected as the winner in ‘Research & Innovation’ from a very large number of projects submitted. “Winning this award is something we can be very proud of,” Gruber said in praise of his team’s achievements. “It is testament to our innovative strength and shows that we are on the right path,” he continues.
The innovative tempering technology ensures greater mechanical stability and increased flexibility, in particular of thin glass. Furthermore, when used in insulating glass, it can significantly reduce the weight of triple units. The new technology almost halves energy consumption during the manufacture and transport of panels from 25 kWh/m² (4mm glass) to only 14.2 kWh/m² (2mm glass, the tempering process included), which again results in an increased estimated life cycle for glazed units.
Lightweight, flexible, but still robust glass sheets without optical distortions are the perfect solution for modern architecture. But also the PV and the solar industry can benefit from the innovative thin glass, for example by using it in cold-bent CSP mirrors or glass-glass modules.
Besides the improved material properties and the high potential for resource and energy savings, the expert panel particularly emphasised the technology’s great market potential. “After the State Prize for Innovation we were awarded in 2007, and given the growing challenges we are facing worldwide, winning this award is a welcome tribute,” says Head of Innovation Leopold Mader. As a pioneer in the field, Lisec has established a tradition of innovative strength. “Innovation distinguishes us from others, as our customers know; and our innovation also makes us an attractive employer for talented engineers who bring new ideas to the table,” Mader continues.
Lisec can look back on a long history of great success. Last year the company celebrated its 50-year anniversary, and only recently announced another major success: The Group achieved a 25% increase in sales for the 2011 calendar year. Every region worldwide saw improvements to their respective business and was able to achieve targeted goals.
In spite of the current reluctance of Western European players to invest, Lisec is looking positively towards the future. “The year has started slowly, just like others did before it. But the 2012 State Prize, and the Düsseldorf trade show in October give us great momentum going into the second half of the year and we are enthusiastic about the future,” Gruber says.