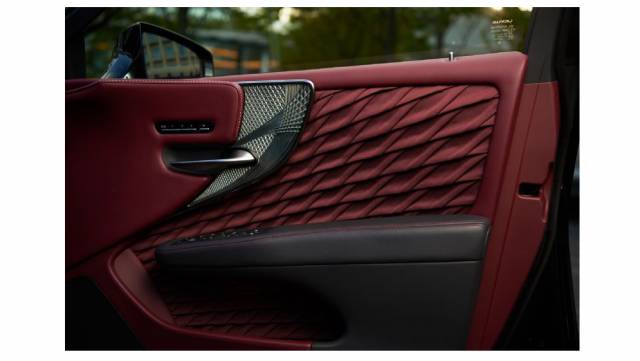 The Lexus LS will have moulded glass panels on its doors

The Lexus LS will feature moulded glass panels on the doors, with glass from AGC, to create the reflective effect of kiriko glass.

The Lexus LS will be available with, not just hand-pleated silk surfacing but also moulded glass panels. The use of glass to form a decorative surface in a car is a world-first – it features on the door panels.
Lexus said the decision to use glass, was “Inspired by fine Japanese kiriko glass, the panels strike a rich visual and tactile contrast with the stitched leather upholstery, cool metal door handles and hand-pleated silk surfacing”.
Apparently, the inspiration for the design of the panels is kiriko, the Japanese tradition of hand-cutting “delicate patterns into glass, producing stunning reflections of light. It is often seen in vases, sake glasses and traditional ornaments”.
Lexus LS chief designer Koichi Suga said the look and feel of the glass changes according to the angle of viewing and the time of day. “This special ornamentation represents the best of both worlds – it is an industrial product that is also a work of art,” he said.
The idea behind the panels began in 2014 when Lexus went to the Asahi Glass Company (AGC) to determine how glass might be used inside Lexus vehicles. AGC turned to Takumi craftsman Toshiyasu Nakamura to “recreate the reflective effect of kiriko glass for the LS. This provided a unique challenge because, unlike a kiriko sake glass, there is no light passing through the glass inside the LS door”. Nakamura described his solution: “Cutting at altering angles through the hand-drawn lines on the glass results in a ‘twist’, allowing more light to reflect at different angles along those lines.”
But crafting a prototype was one thing, Lexus and AGC had to work out how the panels would be mass produced. After a 3D-scan of the prototype was taken an eight-stage process was developed which involved everything from film-dipping to mounting a metal plate to the back of the glass for strength; and all completed at eight different locations in Japan.