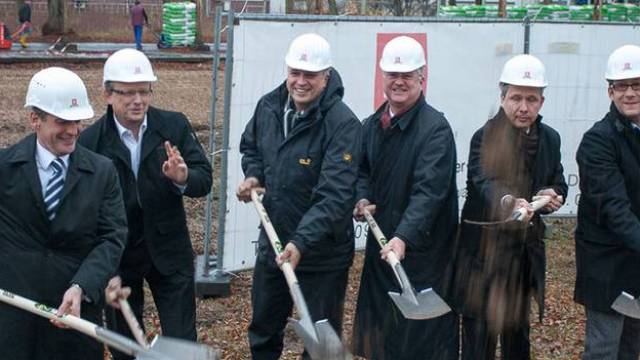 Kuraray Europe held a groundbreaking ceremony to celebrate the start of the construction of its fifth production line in Troisdorf, which will increase capacity in the automotive film sector. A total of 18 new employees will be contracted at Kuraray, some of whom will replace staff who have previously worked on other lines.

At its Troisdorf location, Kuraray Europe GmbH is investing some EUR 20 million in a new production line for Trosifol films and a new warehouse. The construction of this fifth production line in Troisdorf will increase capacity in the automotive film sector to a total of 10 million square metres from the beginning of 2014.
In the presence of a large number of Trosifol employees, the official ground-breaking ceremony was collectively performed by Ralf Eschrich, Head of the Trosifol Division in Troisdorf, Matthias Gutweiler, Managing Director of Kuraray Europe GmbH (Hattersheim, Frankfurt), Frank Rückersberg, Managing Director of T-Park GmbH, Markus Mers, Managing Director of Bolckmans GmbH, and Klaus-Werner Jablonski, Mayor of Troisdorf, on the industrial estate site.
The new production building is being erected on the site of the old packaging store within the core zone of the industrial estate. The site is such that a second production line can be optionally built at a later date. A new central raw materials warehouse is being built in the immediate vicinity in order to ensure a continuous supply of raw materials to all production lines at the location.
Since February 2012, an internal project team has been working on the implementation of various measures associated with the construction of the new film production line. Until its scheduled commissioning in November 2013, many project steps will have to be accomplished. Part of the new production plant earmarked for PVB automotive glazing films will be equipped with clean room technology. “In this sensitive area, the meticulous observance of cleanliness will later be essential,” explains Detlef Hanning, the project manager responsible for the new plant. “Those who work here have to change their clothes first and cannot simply move back and forth between the various parts of the plant. Staff assigned to the new film winders in the clean room have to follow precise instructions so that the film exhibits the demanded quality at the end of the process.”
While the technology inside meets the highest standards, the outer façade and entrance area will impress with an attractive appearance. KEG wishes to be able to welcome its customers and visitor groups in a suitably designed entrance area of the building.
Concurrently with the technical and structural preparations, staff are currently being recruited to run the plant in three shifts. Interested members of the existing workforce have applied through internally published job vacancies, although the team will also be bolstered by new staff taken on from outside. A total of 18 new employees will be contracted at Kuraray in Troisdorf. Some of them will replace staff who have previously worked on other lines. “The new plant will be operated by staff who will rotate rather than have a fixed workplace,” explains Dr Holger Stenzel, Trosifol Production Manager. It is intended that each employee will be able to work in all parts of the plant and step in for workmates absent due to sick or holiday leave. “With an extensive and multi-stage training strategy, we want to prepare our staff for this new challenge,” Stenzel adds.
A “zero defects” strategy will be decisive for future success at Kuraray, and not only when working on the new film production line. “Automotive customers will not tolerate even the tiniest defects in the film as these show up in the windscreen,” says Andreas Karpinski, Automotive Product Manager. “If we want to prevent complaints, we have to work defect-free from the outset. This starts with the quality of PVA and PVB raw materials and continues through to punctual deliveries to our glass customers.”
“To achieve this massive boost in output, Kuraray has to increase its supply of raw materials accordingly,” Matthias Gutweiler and Ralf Eschrich explain.
Equally high are the expectations of the client T-Park GmbH, the owner and operator of the industrial estate, and its general contractor Bolckmans GmbH. For its part, T-Park GmbH is investing EUR 2.3 million in the first new building and making Trosifol available. Bolckmans, the contracted builder, already has plenty of experience of the industrial estate. The firm from the Lower Rhine is currently erecting production, storage and logistical space and an office complex with total floor space of roughly 12,000 square metres for Natumi AG and a warehouse and multi-purpose building for SIKA-Trocal GmbH in the immediate proximity of the new Trosifol production plant.
Frank Rückersberg is also optimistic: “We’re delighted with this investment in the future of the industrial park in Troisdorf. We’re also very gratified by the renewal of Kuraray’s tenancy until 2028.”
The new building will be 75 metres long and 24 metres wide. It is to be completed in May 2013, after which the construction of the new production plant will get underway.
Trosifol is one of the leading manufacturers of PVB film for laminated safety glass worldwide. Trosifol products are used in applications for automotive and architectural glazing, and special films are used for durably encapsulating solar cells in the photovoltaic industry. The primary material for all Trosifol films is polyvinyl butyral (PVB).