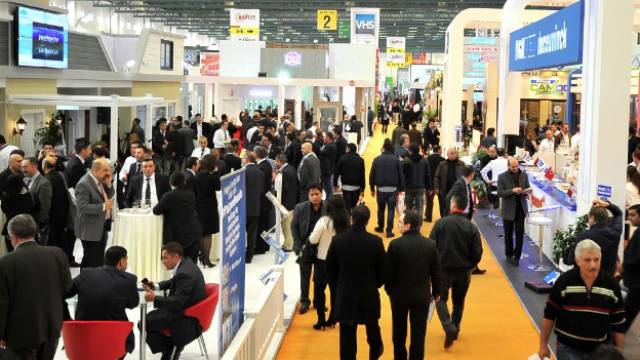 Sales of the 2015 editions of Istanbul Window, Glassexpo and Doorexpo are underway and, the organizers say, thanks to two extra halls, the support of sector representatives, NGO’s and media organizations, these three concurrent fairs will continue to develop the industry sector.

Istanbul Window, Glassexpo and Doorexpo have started the sales of the 2015 events following the end of 2014 fairs. In 2015, with the support of sector representatives, NGO’s and media organizations and two more halls, the fairs will continue to develop the effectiveness and export volume of the industry.
Stability is one of the most important indicators of success. In its 16th edition, Istanbul Window, Glassexpo and Doorexpo were the strongest trade events of window, glass and door industries in Eurasia, despite the economic crisis and unstable global economic balances.
Increasing figures of the exhibitors and visitors every passing year, also prove that the fairs are the first choice of the industry professionals. These magnificent growth rates are not a coincidence. Right from the start the fairs have continued to be the meeting point of exhibitors looking for the latest technology, providing access to new markets.
Istanbul Window, Glassexpo and Doorexpo are the strongest fairs of the industry with regrds to the international market. Last year, with the attendance of 679 exhibiting companies and company representatives from 24 countries, the fairs hosted thousands of visitors from 99 countries covering countries as the US, South Korea, Macedonia, Mexico, Uzbekistan and Senegal.
Following the end of 2014 exhibition, the project team of the fairs have already started working on the 2015 edition with face-to-face meetings and roadshows to organize procurement committees for 2015. Teams are also visiting other industrial fairs in different countries such as fensterbau frontale, China Glass, Batimat, Mosbuild and Mir Stekla. By hosting procurement committees from 28 different countries in 2014, the fairs are aiming to increase this figure in 2015, with 14 halls, including the Aluminium Special Section on 120.000 sq.m.
Having hosted 679 brands from 24 countries in 2014, the fairs will, once again, exhibit the latest designs and technologies in 2015.
Istanbul Window, Glassexpo and Doorexpo will be taking place 11-14 March 2015 at TUYAP Fair Convention and Congress Center, Büyükçekmece, Istanbul, Turkey.