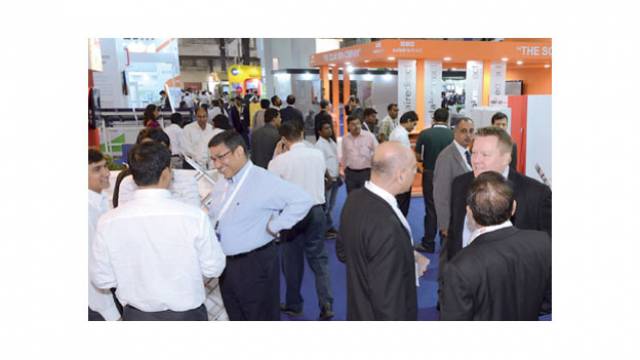 Intersolar India 2012, taking place until today, 8 November, in Mumbai, India, presented the Intersolar AWARD for the Solar Projects in India category for the first time. A total of eight projects were nominated for the new Intersolar AWARD category in early October 2012. An independent jury composed of experts from research, science, and industry selected three outstanding projects from the group of nominated companies.

The Intersolar AWARD for the category for Solar Projects in India was presented for the first time on 6 November at Intersolar India, India’s largest exhibition and conference for the solar industry. The international solar industry prize pays tribute to companies for particularly outstanding solar projects. The Intersolar AWARD for the categories Photovoltaics, Solar Thermal Technologies and PV Production Technologies was presented on 13 June 2012 at Intersolar Europe in Munich. The technology prize for the category Solar Projects in India was presented to three companies as part of an official ceremony that took place at 4:00 p.m. (Indian Standard Time) at the Intersolar India Innovation Exchange. Exhibitors at Intersolar India 2012, Intersolar North America 2012, Intersolar Europe 2012 and Intersolar China 2011 were entitled to submit entries for the prize.
A total of eight projects were nominated for the new Intersolar AWARD category in early October 2012. An independent jury composed of experts from research, science, and industry selected three outstanding projects from the group of nominated companies.
The Intersolar AWARD pays tribute to particularly innovative products and developments from across the solar industry. The launch of the Solar Projects category this year was heralded by the first award for Solar Projects in North America, which was presented during Intersolar North America on 10 July 2012.
Exhibitors at Intersolar India 2012, Intersolar North America 2012, Intersolar Europe 2012 and Intersolar China 2011 were entitled to submit entries for the category Solar Projects in India. To be shortlisted for the Intersolar AWARD, projects needed to use solar energy in a pioneering and unique way. Further criteria on which the jury based its decision included the ways in which the projects are beneficial to the environment and society, their economic advantages and their degree of technological innovation.
Projects were eligible for submission from three different topics. In the topic of Off-Grid Solutions, the jury was looking for projects that stood out thanks to their innovative use of solar energy for off-grid electrification. Here, particular attention was paid to increasing quality of life, boosting productivity and promoting education. The topic of Industrial and Commercial Use sought projects where solar energy is used for industrial production or to supply buildings that are used commercially. The third topic centred on Utility Scale Projects, such as commercial PV installations and large-scale PV power plants.
The award for the topic of Industrial and Commercial Use was presented to Clique Developments Limited, India, for its solar-operated air-conditioning system in the Indian town of Greater Noida, which was integrated into an existing power supply system. The solar heating, ventilation and air-conditioning (HVAC) system is operated by National Thermal Power (NTPC), New Delhi, and saves around 1,000 kilowatt hours (kWh) of power daily compared to the original system for cooling alone. With a reflector area totalling 169 square meters (m2) and a cold-water tank with a capacity of 550 cubic meters (m3), this is the first and largest project of its kind in India. The jury was impressed by the long-term storage capacity and autonomy of the system: Thanks to the cold water tank, the system can work for up to two days without insolation, thus markedly reducing dependence on fossil fuels.
The Intersolar AWARD for the topic of Utility Scale Projects went to the Gujurat Power Corporation Limited, India, for its Gujurat Solar Park project. The Government of Gujurat commissioned the major construction project in order to achieve significant reductions in CO2 emissions within the region. According to the project plans, solar installations with a cumulative capacity of 500 megawatts (MW) are to be erected on an area totalling 20.24 square kilometres (km2). This will be able to supply over 100,000 India households with power in the future, and should generate savings of up to 342,400 metric tons (t) of CO2 per year. The immense significance of the project for the future development of the Indian solar market made a big impression on the jury: The Gujurat Solar Park is ideally suited to the use of various different solar technologies and systems, and should generate a large proportion of all of India’s solar power in the future.
A second prize for the topic of Industrial and Commercial Use was awarded to SunCarrier Omega Pvt. Ltd., India, for its project entitled Omega Net-Zero Energy Building situated in the village of Charanka, Patan District, Gujurat. Comprising a photovoltaic installation with an output of 67 kilowatts (kW) and additional battery storage systems, this pioneering project is ideally suited to ensuring stable power supply in urban areas, as power outages often occur here. Three Cellcube FB 10-100 units, each with a storage capacity of 300 kWh, balance out these electricity shortages. In the jury’s view, this solution is ground-breaking as the system has a stabilizing effect on the power grid and ensures increased energy security.
Intersolar India 2013 will take place at the Bombay Exhibition Centre (BEC) in Mumbai from 12–14 November 2013.