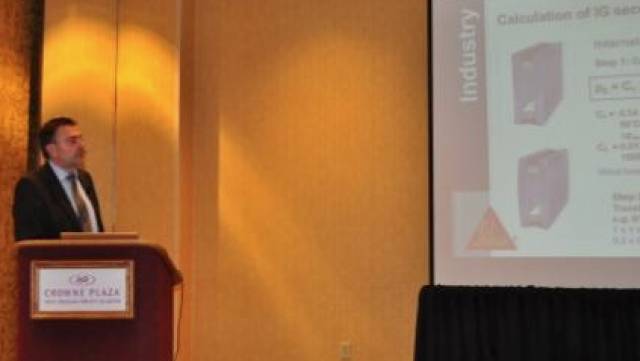 Werner Wagner of Sika Services AG, based in Zurich, Switzerland, presented his findings on “European Gas Loss Testing and Related Benefits” at the Insulating Glass Manufacturers Alliance (IGMA) Annual Conference in New Orleans.
During his presentation, Wagner posed the question of how to reach an international standard for insulating glass units (IGUs) as well as a potential, theoretical solution for a global standard.
According to Wagner, a concept for reaching a global standard theoretically based on the calculations of the isochoric pressure of the IGU has been developed by a German professor. According to this theoretical solution, the pressure is always constant and determined by increments such as temperature, atmospheric pressure and altitude of both production and installation of the IGU. Essentially, it consists of two main steps: calculation of isochoric pressure and transformation to real load on the IG seal.
While the current regulations between European and US standards vary, Wagner said that currently the European standard offers a larger air space and greater thermal load, though the American standard has a much tougher weathering testing system. Despite the testing requirements for US IGUs, European standards, as proven in decades of studies, provide a more reliable, long-term predictability of the gas behaviour, often providing IGUs which retain their gasses longer than their US counterparts, Wagner said.
Wagner closed his presentation by offering the idea that a hybrid of the two standards, adopting the gas predictability of the European standard in addition to the rigorous US testing, which includes the ultraviolet radiation testing the European standard lacks, could present a feasible solution toward a global standard. Further, Wagner noted that IG edge sealants do have room for improvement and a chance for both long- and short-term improvements.